You have heard of the Crazy Lady with the Cats, right? The one that lives down the street … and talks to nobody … except her 99 stray / feral / adopted cats?

Well, I am getting dangerously close to being the Crazy Lady with the Bettas.

And by Bettas, I mean the beautiful, colorful, loner type fish that I seem to identify with for some reason. Siamese Fighting Fish.

This is what they are supposed to look like. 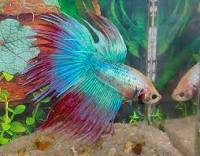 Loves color? check.
Appears to be quite artistic? check.
Fins (Hair) that flies all over the place and cannot be controlled? check.
People seem to find said Fins (Hair) attractive for some reason? check.

Lives alone? check.
A bit on the defensive side about that currently? Well, the blog is helping with that.
Is perfectly content to check out surroundings? check.
Requires very little food to survive? check.

Looks out through the glass and wonders about the others, but stays safely in own bowl? check.
Likes open space, without any clutter? check.
Capable of surviving in adverse conditions until better ones are created? check.
Enjoys plants, which seem to die repeatedly? check.

Well, that and the fact that they are incredibly easy to care for.

There are several different kinds of Betta splendens. Here they are listed if you care to read … courtesy of Wikipedia. 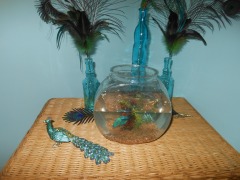 The whole thing started, as you will recall, with me not wanting to hurt someone’s feelings … Enter the turquoise / teal colored Veil-Tail Male.

He looked like a Fred. I named him Fred. He is in the bedroom. He color matches as do the glass shells. It works.

Then there was the time I wasn’t feeling well. I wanted a Red Betta of some kind. I got a Brown Betta. Well, kind of reddish-brown. He also kind of matched the wood tones of the room here.

I think he is the Halfmoon Double Tail Plakat Male.

I felt compelled to say “Hey Bert” every time I passed his bowl for some reason … which found its way to my desk. So Bert he became.

But then there seemed to be a missing link. I was doing my best Ernie impression each day … and what’s a Bert without an Ernie? Besides, Ernie is red. Sort of.

Enter a Crowntail Male in a brilliant color of Red. I  like red. And of course his name was Ernie.

Move Bert and Ernie to two of the steps opposite me here in this wonderful creative space which used to be my living room.

Time passed. Nobody died. They even thrived. Well, they all made bubble nests in anticipation of lady Bettas.

I thought I was over the whole Betta thing. Fred, Bert, Ernie and I were peacefully co-existing and life was good.

Until Linda said “Hey, I have a 20% off coupon on any freshwater fish.” 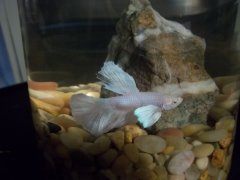 But this one was one of a kind. 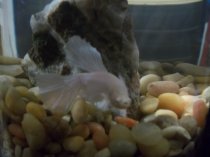 Smarter than the others. See? He even turned when I took his picture.

I briefly considered naming him after a former flame of mine. But then, that would be kind of creepy.

And it wouldn’t be fair once I moved on to someone else.

Oh, and it would hardly be fair to the Elephant Ear Betta. Despite any similarities.

I am calling him Big Fella for the time being. I am sure another name will come to me.

He is going out in the front room … once it gets warm enough. His stones match the decor.

11 thoughts on “The Crazy Lady With The Bettas”