And on Wednesday the bags and bags of bags and bags were put out on the street … along with my one monthly bag of trash … for the kindly trash hauler to pick up early Thursday morning … I hoped.

So not being willing to lug the sixty or so bags back up the fourteen steps till next week, I called the kindly trash hauler. Who said “I can’t imagine why they didn’t pick up your trash along with all the neighbors trash.”

“Well, there were a few more than usual this week. Maybe their truck was full …” I replied.

At this point he promised that the guys would run back over to our neighborhood and pick up the bags.

“Are they heavy or something?” he asked.

“No, I took down the ceiling in a room and put the batting in bags … so they are really, really light … but there are a lot of them.” I somehow felt it was only right to warn him.

And I left immediately, so as not to be there when they showed up.

And today we (My Friend Ann and I) worked on getting the last of the batting down and I removed the tape, scraped the few drips of paint, and got everything ready for reglazing.

Now it’s a funny thing about roofs … and ceilings … and what happens when you have a suspected leak … and take out everything between you and said leak.

I had no idea how much water was included in a simple summer shower. With a bad roof. And no ceiling.

Reading the handy-dandy “whats-up-10-roof-styles” article that miraculously appeared in my morning set of internet screens, I discovered that there were many choices to be had. Sounded simple enough.

According to the article …

The roof is often the most overlooked part of your house. If your roof is doing its job, you’re probably not going to notice it much. It’s often not until a roof fails and rain is pouring into your living room that it really comes into focus.

Well, that shows how much they know. The rain is pouring onto my porch room, not my living room.

I continued to read …

Before that happens, you can check your roof to see if it’s time for a new one. … Look for four things.

Oh, this ought to be good.

Number One … Places where the roof deck is sagging. 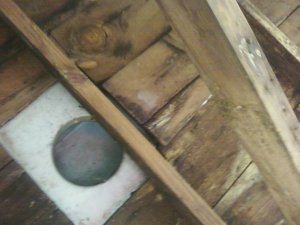 I don’t know roof deck, but at my age I know sagging.

So are we talking like this board that’s hanging down below the others?

Or like this? Definitely water. And the damage is up in the roof … so I guess that counts.

Okay, on to the next item …

I would take pictures of some of the others, but why brag … I am thinking this qualifies … On to the last of the four things to look for.

Number Four … Outside light showing through your roof.

Oooh … oooh … I have that … actually several of them … the’s how I get that lovely pond effect at the front of the room every time it rains now.

OK, so here is a picture of one. The medium-sized one.

If you have any of these, it’s time for a new roof. Now the question is: What style do you choose?

The sound you now hear is me laughing uproariously. I am sure you can hear it from here to where you are.

What style do I choose? Oh that’s rich.

The question really is “how badly damaged is the floor under the holes … really? I mean, is anyone falling through the floor yet?”

Or better yet “How many buckets will it take to catch the water when it rains? And how many times a night will I have to empty them?”

Or more realistically “How many tarps will it take to cover the roof and keep the rain out until next year some time when I might actually have the money for a new roof?”

OK, so the project for next weekend looks like it is putting tarps on the roof until next year … or until that funding that my neighbor mentioned happens.

Camouflage Tarps ought to blend well with the trees, no?

Hopefully it won’t rain before then …