I am so looking forward to this debate tonight. So much so that I actually thought it was going to be done yesterday. Not sure where that idea came from.

To say that I was disappointed in the first round … the first Presidential debate … would be the understatement of the year.

I had hoped for a good exchange of true facts and a display of speaking style and humor … all well moderated by a set of rules that would lend order to it all.

What I got was our President looking more like he hadn’t studied for the final exam and a challenger who told untruths and interrupted constantly … and a moderator clearly not in control of … well, anything.

When I saw the President jotting down notes as the challenger spoke, I thought “Oh good, he is jotting down a few salient point so he can rebuff them in a follow-up.” 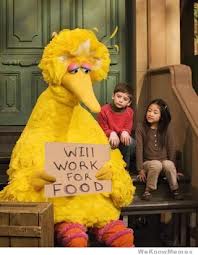 And when the challenger looked the moderator in the eye and said words to the effect “Hey I really like you. You’re fired.” I just couldn’t watch anymore.

Although I recorded the whole thing, I could not watch it as it was happening. Too painful.

In the following days there were several cartoons and posts out on the internet … not the least of which was the one of Big Bird. Being willing to work for food.

I know the feeling.

And of course Big Bird was featured prominently in a great number of the political cartoons for obvious reasons.

I won’t put them out here … well, OK, maybe just this one.

Have to admit, they made me laugh.

I like to laugh. So I am truly hoping that tonight there is something to laugh about.

At this point, I don’t care if it is laughing at the Vice-Presidents’ always present gaffes … or the fact that the challenger strangely resembles a former child TV star … I just want to laugh … out loud. Tonight.

Maybe its just me, but I thought that would be cool. Makes me happy.