An amazing thing happened yesterday … and then a little bit this morning.

Everyone will have heard about the horrendous incident in Boston yesterday … at the end of the Boston Marathon. That alone is not what I am talking about.

It was a shock to us all. And as reports of injuries and deaths … senseless maiming and horror … people reacted.

And they all reacted with honor.

But then something happened which I was not expecting. At all.

It struck me as odd about the third time it happened.

Usually, of the small group of people in my Facebook friends list, there are words of wisdom, comfort and inspiration. Almost unanimously it consists of posts from women. 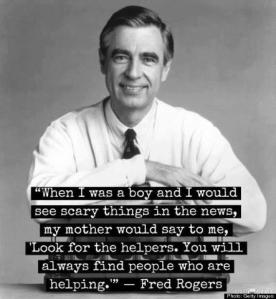 The men post as well, but not consistently in the touchy-feely category.

Then early last night there was first a post from my friend Denny … tinkerer of electronic devices and all around good guy.

It made me smile.

I grew up in Pittsburgh where Mr. Rogers was filmed … and family rumor held that a relative was a friend.

My guess is that most families of that time in Pittsburgh had that claim.

But the comfort of his words … spoken from beyond the grave and communicated on Facebook … gave me a sense of safety. That all would be well. Because if Mr. Rogers said so, it must be true.

Then a short while later came a link from my friend Andrew … international social activist, comedian and all around good guy.

He lives in Boston.

He had been posting valuable information all day on the attack. So I followed the link he posted to … the same quote from Mr. Rogers at another site.

With the same picture.

Nice, I thought. Warm feelings flooded me once more. And I thought some supportive thoughts for all the young children who had been confronted with so much in recent weeks.

A short while later, there was a post from my friend Victor. Australian native, University Math Professor … and all around good guy.

Yes, I know a lot of them. All around good guys.

He posted the following picture.

With the same quote.

At about this time, I noticed that unlike the typical day on Facebook, the posts from my women friends were strangely absent.

But the three posts from my men friends were all supportive in a being-taken-care-of kind of way.

Time proceeded … and I began to think of this. How all three men had risen to the occasion. To try to comfort those of us reading Facebook. And all three had gone to the same well, as it were. The place where comfort was plentiful when we were children.

This one from my friend Greg … former manager, college administrator … and all around good guy.

It was not a Mr. Rogers reference, but it was nice nonetheless.

And that strange feeling that the men were stepping up to it all … being protective … could not be shaken.

About this time there was one post from my friend Linda. Of a scene at the bombing … with an American Flag superimposed.

This morning there were some other posts from men.

From David … author, activist … and all around good guy … came this post.

But still, the same sentiment. How universal is this? 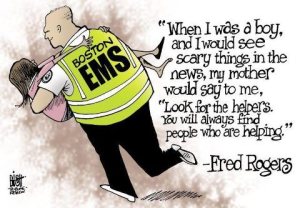 A few minutes after I saw this, I got two additional posts.

One was from George Takei.

Yes, that George Takei. Actor, social activist … and all around good guy as far as I can tell.

I and about a gazillion others are followers of his Facebook page.

And in his case he chose … the same quote … from Mr. Rogers.

With a different drawing, but the same quote nonetheless. The same sentiment. showing a man carrying a little girl out of the chaos.

On my NPR shift tonight, I heard someone on All Things Considered talking about the bombing. I just went out to the Boston NPR site, but cannot find the exact interview or the exact quote.

There was one more posting of the picture of Mr. Rogers, from a man I believe, at Upworthy. With the same quote on the same picture.

I must admit, besides feeling good about the innate goodness of people in time of crisis, the pictures and continual reference to Mr. Rogers made me realize that he had a profound impact on us as children … and the adults we would later grow to become.

And it occurred to me that he allowed little boys to feel feelings … and to be scared … and to feel protected … and all the things that are assumed for little girls.

And I was touched that so many men … and not one woman … went to that place of childlike comfort.

That place that Mr. Rogers created for us all.