I think I have mentioned that I basically spend my weekends at a lake … in a very old Hotel on the lake.

Did I happen to mention that it was haunted?

As in everybody in the area knows it is haunted … and they even know her name (Elizabeth) and where she lives (Room 128) and what happened (died in the fire). At least Wikipedia agrees.

In 1943, a large portion of the (hotel) was destroyed in a fire. The ghost of Elizabeth, a bride who supposedly died in the fire, is said to now haunt the hotel.

Suffice it to say that it attracts all kinds of folks … especially around Halloween. 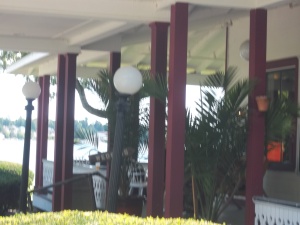 This morning in the antique-laden lounge off the lobby, after having talked at great length with the American Coaster Enthusiast folks in town checking out a famous old wooden coaster, I went to pour my second cup of coffee.

In front of me was a gal who had done all the makeup / hair for the wedding yesterday … and she began talking at great length. About the hotel. About the ghosts. About the fact that she is someone who “sees” ghosts.

Interesting … especially since I had never met her before.

Then on my way to the porch to sip coffee and use the internet,  I ran into a couple that I had met yesterday as they checked in.

“It isn’t open to the public” I had said “but I am sure you will find other things that are interesting.”

This morning … looking a bit peaked but none the worse for wear … she informed me that she always leaves lights on somewhere in the room when she is in a new place. I am thinking that is so she doesn’t get up in the middle of the night and walk into a wall or something.

“I got up several times last night … and every time, the light had been turned off.”

And no, her husband didn’t strike me as the type to do something like that just to spook his wife.

But then you never know.

“I told him I had met you, then he asked me what your name was and where you were from and I didn’t know and …”

A short introduction and chat later, I was told that they heard small children running up and down the hallway last night. But when they opened the door … nothing.

Then there is my friend Linda who, when up for an overnight visit, asked if I had sat on her bed in the middle of the night (no) because otherwise there was a ghost sitting on her bed.

Here I am … up at the lake … in the hotel … every weekend.  Even writing a story in which there is a ghost … sort of.

Have I seen a ghost? Or anything unusual and otherworldly?

Unless you count the drunken woman on the porch last night bouncing a very short man up and down on her knee.

Pretty sure they weren’t ghosts. Although he looked pretty pale and shaky this morning.

2 thoughts on “Hello? Elizabeth? Is That You?”