Well, who would have expected that?

As many of you know, I have ventured into the world of online dating. Lots of funny stories, lots of very nice people, and lots of unexpected things.

But few more unexpected than a response from a week and a half ago.

My profile quotes a line or two from poetry, slightly modified, then offers “bonus points” if the reader can correctly identify them.

I also give bonus points for a deep voice, the ability to carry a tune and a few other things.

Last Sunday a response started with “Is it Thoreau’s Walden, Alex?” as though he was on Jeopardy. And continued in an equally witty vein looking for bonus points where he could get them.

He got several … including some unexpected bonus points for an obscure albeit appropriate commercial reference. Started thinking we just might have a winner here.

We have been chatting back and forth since then. I’m not saying it’s gotten a bit steamy but … well … OK … maybe just a little tiny bit from time to time.

Let’s just say he’s got my attention and it’s been an interesting week.

Then on St. Patrick’s Day up popped a man of distinctly Irish heritage and name. This one also with intelligence, humor … oh … and he seems to be interested. In me.

“I think that we have extraordinary potential. I don’t want you to just slip through my fingers.”

He is self-described as “Not George Clooney, but not a troll. Slightly above the median on the Clooney-Troll continuum. Cute enough for a cup of coffee. And I’ll treat!” 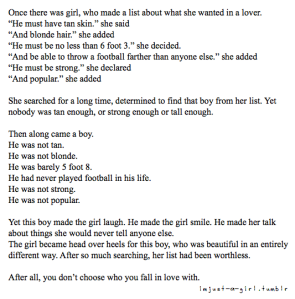 And as I explore getting to know a few gentlemen … some from the Online Dating Site, some recommended by friends, and some I actually meet in the regular old-fashioned in person way … I am struck by the words written by a young lady in her blog.

I recommend her blog highly by the way. Lots of young angst, but lots of cute sayings … like this:

All I’m saying is that this is becoming great fun.

And no, I’ve not picked a winner yet.

Yes, I’ve been spending time with some very nice people … both in person and online … for many months here. My normal inclination is to make choices eliminating folks for some real or imagined “fatal flaw”.

You know … “He’d be OK, except for his spelling.” or “I’d go for him but I wanted one with a beard.” or “Yes, but he is younger/older than me” or some other equally unimportant thing.

Astute readers will recognize this for what it really is.

I think for once, I’m going to be taking the advice of my wise and wonderful counselor who has seen me through my recent heartbreak and beyond. It’s been working pretty well so far.

He has suggested that I entertain more possibilities … see several people at the same time. That I not eliminate people out of hand, limit my choices or make decisions before they need to be made.

And that I not rush things … just relax … and let things develop as they develop.

What a radical concept.

I might just have a lot of fun that way, huh?