And once more tears came to my eyes. When did I become such a softie?

That has happened a lot these last several hours since I heard that Robin Williams had died.

This quote has always spoken deeply to me. And I always thought of him as some kind of kindred spirit for a variety of reasons. One of my favorite people. 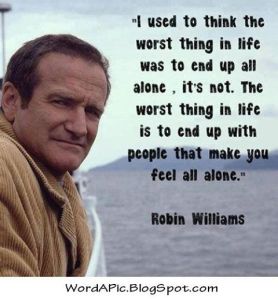 Today I was listening to Terry Gross on Fresh Air (NPR) today playing a 2006 interview with Robin Williams.

I was struck senseless by this sentence that he said.

I made a meme.

1 thought on ““Life Isn’t For Everybody””