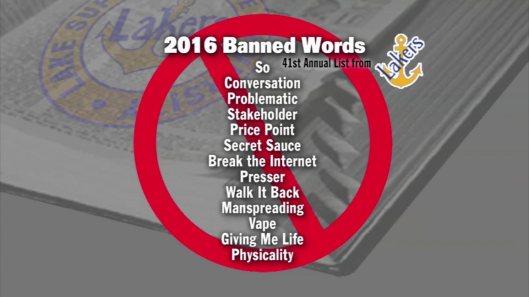 He is wrong. That’s all I’m gonna say.

Good thing he is my friend. So.

This link came up on my Facebook feed … about the top banned words for 2016. Seriously. And, oddly enough, it brought to mind something that JUST happened to me.

I sent an email to a friend the day before yesterday saying “So. I just brought up my pet project…” He responded …

“I. Find that punctuation structure annoying.”

Soooo … I explained that I was just trying to replicate the way I talk. As in “So. (pause) I just … etc”.

The one-word sentence strikes me as immature. Or someone trying to sound immature. I’m just saying that’s how it strikes me. And I’m sure I’m not the only reader who has the same response. But of course you don’t have to be concerned with how you “sound” to people.”

I sent him a link to this article.

Talk about problematic! Maybe he will join the conversation. Before I break the internet over his head.