Yeah. #MeToo I’m thinking it’s true for most women “of a certain age” who worked in corporate America in the 70’s and 80’s.

Glad to see so many women have added it to their feeds. 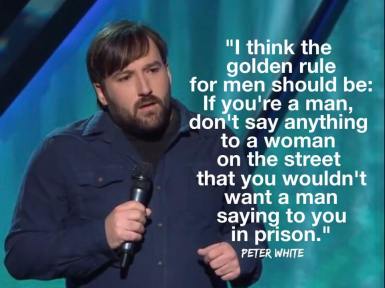 I have a friend whose abuse stories would make your toes curl … and not in a good way.

She did not post #MeToo. Said that it was nobody’s business. So for all the people who did post it, there are many many more who could but didn’t.

Here’s hoping that a change will come. Trust me, we didn’t all march in DC and other places worldwide the day after Inauguration Day because we wanted fresh air and exercise.

Again, for those of you men who might have wondered. Men basically don’t think about it. Women think about it all the time. Gosh. I wonder why. #MeToo

“I draw a line down the middle of a chalkboard, sketching a male symbol on one side and a female symbol on the other. Then I ask just the men: What steps do you guys take, on a daily basis, to prevent yourselves from being sexually assaulted?

At first there is a kind of awkward silence as the men try to figure out if they’ve been asked a trick question. The silence gives way to a smattering of nervous laughter. Occasionally, a young a guy will raise his hand and say, ‘I stay out of prison.’ This is typically followed by another moment of laughter, before someone finally raises his hand and soberly states, ‘Nothing. I don’t think about it.’

Then I ask women the same question. What steps do you take on a daily basis to prevent yourselves from being sexually assaulted?

Women throughout the audience immediately start raising their hands. As the men sit in stunned silence, the women recount safety precautions they take as part of their daily routine.

Here are some of their answers:

Hold my keys as a potential weapon. Look in the back seat of the car before getting in. Carry a cell phone. Don’t go jogging at night. Lock all the windows when I sleep, even on hot summer nights. Be careful not to drink too much. Don’t put my drink down and come back to it; make sure I see it being poured. Own a big dog. Carry Mace or pepper spray. Have an unlisted phone number. Have a man’s voice on my answering machine.

Park in well-lit areas. Don’t use parking garages. Don’t get on elevators with only one man, or with a group of men. Vary my route home from work. Watch what I wear. Don’t use highway rest areas. Use a home alarm system. Don’t wear headphones when jogging. Avoid forests or wooded areas, even in the daytime. Don’t take a first-floor apartment. Go out in groups. Own a firearm. Meet men on first dates in public places. Make sure to have a car or cab fare. Don’t make eye contact with men on the street. Make assertive eye contact with men on the street.

― Jackson Katz, The Macho Paradox: Why Some Men Hurt Women and How All Men Can Help”

And then there is this widely shared anecdotal story.

A hard working ER nurse and mother to a teenage girl was called into her daughter’s school for an astounding reason: her daughter had struck another student. The mom rushed to the school, ready to punish her daughter’s unacceptable behavior.

Once she arrived at school and heard her daughter’s side of the story, this mama bear changed her tune in a hurry. Check out the mom’s story below.

I’m an ER Nurse. We’re not allowed to keep our phones on us, they’re to be kept in our lockers. A call comes into hospital reception on a private line for me.

Phone: “This is (teacher) from (school). There’s been an incident involving your daughter. We need you to come in.”

Me: “Is she ill or injured? Can it wait until my shift is over in two hours?”

Phone: “Your daughter has struck another pupil. We’ve been trying to call you for 45 minutes. It really is very serious.” 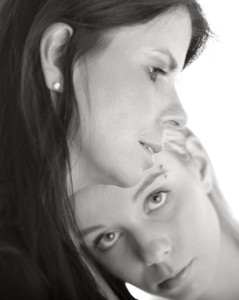 I go to the school and am ushered into the principals office. I see my daughter, a male teacher, a female counselor, the principal, a boy with blood around his nose and a red face, and his parents.

Principal: “How kind of you to FINALLY join us!”

Me: “Yeah, things get busy in the ER. I’ve spent the last hour administering over 40 stitches to a seven-year-old who was beaten by his mother with a metal ladle and then I had to deal with the police regarding the matter. Sorry for the inconvenience.”

After watching him try to not act embarrassed, he tells me what has happened. The boy had twanged my daughter’s bra and she had punched him in the face twice. I got the impression they were more angry with my daughter than the boy.

Me: “Oh. And you want to know if I’m going to press charges against him for sexually assaulting my daughter and against the school for allowing him to do it?”

They all get jittery when I mention sexual assault and start speaking at once.

Teacher: “I don’t think it was that serious.”

The boy’s mother then starts crying. I turn to my daughter to find out what happened.

Daughter: “He kept pinging my bra. I asked him to stop but he didn’t, so I told my teacher. He told me to ignore it. The boy did it again and undid my bra so I hit him. Then he stopped.”

I turn to the teacher.

Me: “You let him do this? Why didn’t you stop him? Come over hear and let me touch the front of your trousers.”

Me: “Does that seem inappropriate to you? Why don’t you go and pull on the counselor’s bra right now. See how fun it is for her. Or on that boy’s mom’s bra. Or mine. You think just because they’re kids it’s fun?”

Principal: “With all due respect, your daughter still beat another child.”

Me: “No. She defended herself against a sexual attack from another pupil. Look at them. He’s a foot taller than her and twice as heavy. How many times should she have let him touch her? If the person who was supposed to help and protect her in a classroom couldn’t be bothered what should she have done? He pulled her bra so hard it came undone.”

The boy’s mom is still crying and his dad looks both angry and embarrassed. The teacher won’t make eye contact with me.

I was so angry I gathered my daughter’s things and left. I reported it to the superintendent, and was assured it was strongly dealt with.

This story just goes to show, a mother will do anything to defend her child, and it’s a powerful reminder that it is never okay to be treated with disrespect.

Let this story serve as a reminder to treat others with respect and to always stand up for what’s right, especially when that means defending the defenseless.

Oh, and in case you wondered, there is this. Especially #5.  Speaking for myself, of course.