Back a few years ago when Senator Arlen Specter was running for re-election, I was asked to a small private gathering with him. Press attended. So one of the few times I have shown up in the press was as “Baby Boomer Holly Holdren”.

Not too often does a concerned resident get to express her situation directly to someone who might make a difference. But that’s exactly what uninsured Baby Boomer Holly Holdren got to do when U.S. Sen. Arlen Specter held a town hall meeting with area Democrats Wednesday evening.

“Holly, I think we’re going to cover you,” he said.

Now actually, I had met and talked to him at length several years previous … about funding for educational programs, but I somehow don’t think he remembered me.

And I have met President Clinton … twice … although my daughter says maybe I should not tell people about that.

So when I was asked to be part of a private group of around twenty people to meet Senator Casey and his wife this evening, I was honored to say yes.

The press did not attend.

Now, let me explain something here. I don’t usually get into politics on this blog. Not the place for it. Usually. But I need to explain the demographics of the area.

We are in the mushy middle of the state in an area that is called the “T” … mostly because there are precious few Democrats in a large area of the state that resembles that letter. And I was not one of them. At least not until a few years ago.

I was, in my childhood, a Goldwater Republican. I hear another famous woman was, too. And many years ago, I campaigned vigorously for what and who I believed in.

My general views have not changed. But the parties did.

So, years ago I became a registered Independent … and a few years back made the jump to registering as a Democrat. My late Grandma would be proud. She was quite active in the Democratic Party back in the 30’s and 40’s as I understand.

My parents think the aliens have sucked out my brains. This is usually said as they genuflect in the general direction of a picture of George W. Bush.

Big fans, they are. 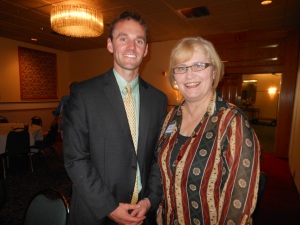 In advance of the Senator’s arrival, his aides showed up and were greeted with all the cordiality you might expect of the situation.

And as the gathering was small, many stories were shared of life in the distinct minority in this section of the state.

One woman shared how, at her bridge club, she had finally had enough of the political talk bashing President Clinton and said “Could we please not talk politics this week? I like President Clinton.”

On arriving home, there were phone messages from two of the other bridge players informing her that they, too, were Clinton supporters … but were afraid to let it be known publicly.

As you might expect, Senator Casey was well-spoken, charming and well-dressed. He spoke briefly on the campaign, the status of the country when Clinton began (debt), when Clinton left (surplus) and when Bush left (big big debt) and where it was now (not quite so big debt). 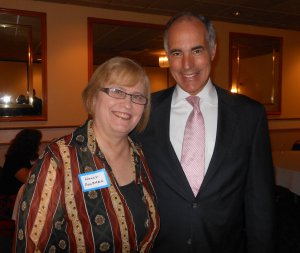 He spoke on the unemployment numbers and how we are halfway out of the pit that was there four years ago. And then he spoke as a member of the Foreign Relations Committee (former Armed Services Committee?) on his perspective on the situation between Israel and Iran.

Senator Casey was also tolerant … and I say this because of what I asked him. Or rather suggested to him.

Earlier in the day, my friend Texas Linda had made a suggestion as to how we might address part of the National Debt. And she asked me to promise to mention the idea to the Senator … which I did.

Now, as I said to Senator Casey … “Don’t laugh until you have heard the whole idea” … to which he replied “Tell Linda I would never laugh at her idea.” And he did not.

He smiled a lot, but he did not laugh.

He did say something about the best ideas coming from our county … but then he is running for re-election. I’m not holding my breath on this one. But here is the idea.

Yes, a lottery. A national lottery.

So you would be the only winner if you won, because nobody else could play your Social Security Number.

■Only Legal Folks Play – In order to play you must have a Social Security Number so there is no chance that an illegal alien would win.

■Fair – Since only one ticket needs to be bought, the poor person could play with the same odds as a rich person.

■Big Money – There would only be one winner … and that winner would get it all … preferably tax-free.

■Gambling Not Needed – Unlike other lotteries where folks might be tempted to “bet the ranch” there is no additional benefit to additional tickets even if you could get them.

■18 or Older to Play – Although children have Social Security Numbers, you would want to protect them from the potential of a parent killing them for the money. I know … a bit far-fetched for most … but it happens.

■Non-Controversial – The governments part of the money would go toward the National Debt. Not toward any policy or project that might be considered undesirable by one side or the other.

Now, I am guessing that some of you are laughing at this point. And I must admit I laughed when I first heard about it.

But seriously … don’t we need to be stopping with the mudslinging and stone-walling? And start with the bi-partisan creative solutions? No matter where they come from?

Dare I say …. compromise and work together? Radical concept.