English: Beech and Holly This stand of fine beech trees, with old holly trees growing beneath them are on the edge of Cranbrook Wood. Photo taken Christmas Eve 2007, and not a holly berry in sight… bad news for the blackbirds! (Photo credit: Wikipedia)

Okay, so technically Monday was half-time.And although I was thinking about that fact a few days previous, it was my Aunt who pointed out the fact that I had started this blog … this Happy Holly Project … six months ago.

Half-way through the year.

Time flies when you are having fun?

But all kidding aside, this has been a really unique writing experience for me.

Because I am not a writer.

I feel not unlike the Beech tree in the midst of all the Holly trees in the picture above. Branchless but strong … out-of-place but still standing … with not a Holly Berry in sight.

But, talent notwithstanding, I am flooded with the most enormous sense of gratitude for this blogging, this writing, that I have been doing.

It has helped me to focus on something other than my heartbreak. It has given me a chance to do something I had never done before. It has allowed me to be creative in ways I hadn’t really thought of before.

And it has given me a whole lot of feedback. From everywhere.

And when I say everywhere, I mean everywhere … except Greenland and Chile and Lithuania and … okay, so maybe not everywhere.

But let me show you the lists …

First the one that WordPress provides:

And this does not include Afghanistan, China and Myanmar …  all of which have seen my site.

Then there is the ClusterMap which reflects countries since December 9th even if their hit counter is off by at least twice the number:

Then there is the map that WordPress provides, again minus a few of the countries for some reason. 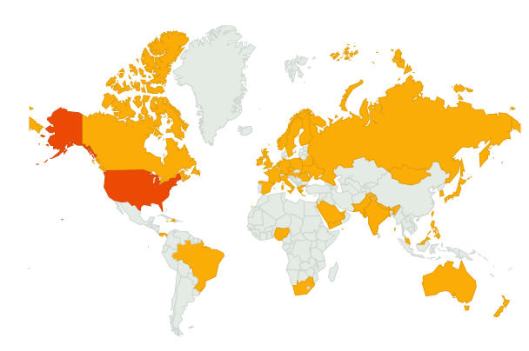 I think it would be exceedingly cool to have China, Greenland and a few more African and South American countries colored in. No clue how to go about that.

I also have followers … such as they are … 87 from here on WordPress and another 32 from Facebook and whatnot … plus another handful, like my parents, who read regularly and are not “official” followers.

Stunning for six months worth of work … every day … without missing a day.

And yes, I know that not all of my efforts here are winners. But there have been a few … seriously.

Folks find me by word of mouth, email references, searches on WordPress … and searches on Google … some looking for images and some by mistake.

But that is all right.

I am just very happy that folks have seen fit to look at the blog.

Even if it was by mistake.

I’ll take hits no matter how they arrive at this point.

1 thought on “Half Time … And Not A Football In Sight”