I was just out on the wonderful Facebook, and saw that one of my favorite authors posted something with a hashtag of #ProcrastinationIAmYourQueen.

I don’t do Twitter … mostly … so the fact that I even recognize a hashtag is pretty amazing all by itself. 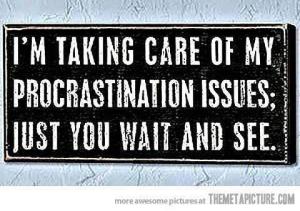 I procrastinate. Without help of any Twelve Step Procrastinators Anonymous help.

So I have put off until now the writing of todays post.

And yes, I know that some days I put it off even later.

But, you know, some days there are fewer Happy things to write about than others.

I thought I had it in the bag early this morning as I looked out over the vast area that is my property here.

Okay, its only a little over an acre … but its my acre.

And I saw a Bald Eagle.

Dark body, white head … and there is a town nearby named after them. Because they are rampant in this area.

And I have heard them in the past around here, although I have only seen them out on the main highway.

So, with all due speed and diligence I went downstairs, got my camera, and prayed to the Eagle gods that it would still be there when I got to the window to take the picture.

Unlike my earlier attempt to get the picture of the Pileated Woodpecker, this time I got the picture.  A great picture. Dark body … White head. Thrilled.

And although there was something else that thrilled me today, I decided to do my blog post about this.

Now, you ask, why does this have anything to do with procrastination?

Well, step back with me, if you will, to this morning … the morning of the picture of the eagle.

Some of you already know where this is going.

While being thrilled about the fact that I had gotten a great picture, I went into the room here … where I type blogs and whatnot … and saw the stack of presents for a lucky young man tomorrow.

And the gifts are not wrapped. Maybe tomorrow. After all, they don’t really need wrapped until tomorrow afternoon.

Procrastination at its finest.

But I started to think about the Bald Eagle. Was it still there?

It was. In the bushes.

Funny, Bald Eagles don’t usually perch in bushes. I’ve seen them other times on high power wires, and extremely tall trees … but never bushes … and never in my yard.

And they don’t usually stay anywhere for any length of time … certainly not an hour.

So I looked closer.

At its white head.

Did I mention here that there is a friendly new emoticon that works on Facebook? It only works on messages and comments … but not posts … it is something like this … :poop: … and it applies here.

It’s not a Bald Eagle.

It’s a dried up group of leaves … with snow on the top … melting snow.

But I did get a really good picture of the group of leaves … with snow on the top.

Even if I procrastinated till the last minute to tell you about it.

Related articles – Because I really like frogs and I am a procrastinator.

3 thoughts on “Procrastination, I Am Your Queen”