Today is the beginning of the discussion in the Supreme Court on Equal Rights for gay people.

As I was driving up here to the radio station I, of course, listened to NPR … and the debate was on. Between members of the Supreme Court.

A few laughs … a few pointed questions … a few indications of how the decision may go.

Personally I think they will say it is up to the states to decide whether to legalize gay marriage, and if they do then folks are entitled to Federal benefits … or something like that.

Though lord knows, my success with lawyers and judges and what they will decide to do is limited to say the least.

But a strange thing started happening out on social media. The picture you see here has basically become a viral profile picture on Facebook.

I updated my picture to this after seeing it out there on the status of a friend. A straight friend.

And I decided to show where I stood. After all, what are beliefs good for if you are not willing to stand up for them? Even when you are at risk?

So I put this picture out there along with this comment:

Just for today … and maybe tomorrow … I am showing here that I really believe that this country is meant for all people to coexist … peacefully and equally. Whether we agree with someones religion, politics, food allergies or choice of car … this country was founded on the whole idea of NOT having the government restrict our choices.

Putting it out on my “big” Facebook page was a bit of a risk. I have a few relatives who live in and near Wasilla, Alaska. Need I say more?

Oh yes they are.

One of my more gun / god / gay relatives … I thought … instantly “liked” the comment. And it occurred to me that she may have reacted to the words “NOT having the government restrict our choices.” as opposed to the part about “choices” and “peacefully and equally”.

But you never know.

As time progressed several other comments appeared … many of which had this same icon as the profile picture. 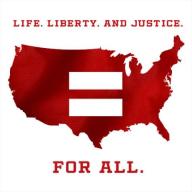 Then the inevitable happened … the other ones.

I rather liked this one. Both the intent and the nice application of color. 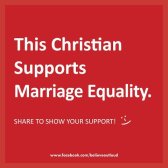 A few folks that I had always thought of as basically conservative put this picture out there to show their support. 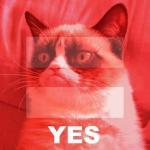 Today appeared to be the day to make a statement.

Then there were the cat people. And of course the angry cat had to make his opinion known. 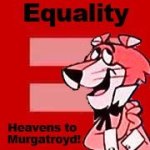 Lots of people willing to make that statement known.

Then there is the picture from the cartoon museum in Pittsburgh … the Toonseum … and features one of my favorite cartoon characters from childhood.

At this point I changed into a red shirt. No harm letting people know who might see me in public. If they knew what was going on out there on Facebook.

One that made me laugh out loud was the one posted by The Oatmeal … if you have never read it, and like to laugh, or like cartoons, I recommend it highly.

He put this out there with the comment “Changed my profile pic for marriage equality. Also for bacon. … Feel free to use my profile pic as your own. Bacon for all.”

One gentleman from another country said he didn’t understand.

George Takei, himself in a gay marriage, showed no hesitation in putting not only the equal sign picture used by many people … but also this picture.

Just in case you are opposed to marriage equality.

It’s a math term too, after all.

But the picture and quote that made me laugh out loud was the one about that famous radio personality … Rush Limbaugh.

So let’s see if I understand this correctly.

Nope. No irony there.

3 thoughts on “Equality, Fraternity … And Bacon?”