Last year when this day came around I was all excited about it.

Long time Star Wars fan … the original three movies … I thought it was witty. Two years ago was when I first heard it. May The Fourth Be With You.

And I was thrilled a year later when I remembered.

So I was all ready to do a whole blog entry on it this year. I even had my “Rats Wars Poster” ready to go.

Rat is the main character in Pearls Before Swine … my favorite comic strip.

It even had Cheesey Poofs and Crocs with flying backpacks.

Careful observers will even see the evil Darth Pastis in the background.

Was all ready. Except … for whatever reason it is not as thrilling this year. I wonder why?

Could it be that everyone and their brother knows about it and has some witty poster to go with it?

Or maybe its all the various things for sale out there today with the Star Wars theme … not that I can blame them. 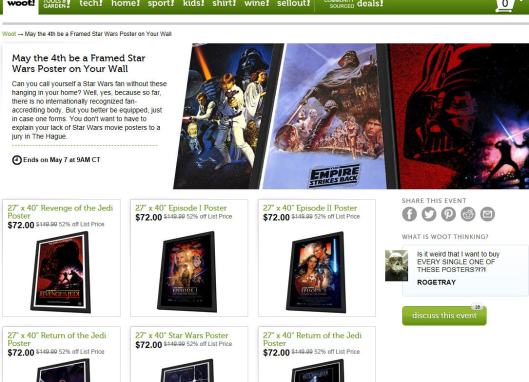 Or was it the media blitz with Harrison Ford and Carrie Fisher … with lots of speculation about a possible upcoming Star Wars movie featuring them at a more advanced age.

Maybe it was Patton Oswalt‘s Star Wars Filibuster on Parks and Recreation.

But for whatever reason it just didn’t have the cool factor that it had last year … except maybe for Stephan Pastis‘ poster.

Seems to me like this calls for some kind of payback … dare I say … Revenge?

The Revenge of the Fifth, perhaps?