… are sitting in a hotel lobby together.

Sounds like the start of a good joke, you say?

Okay, then how about this … 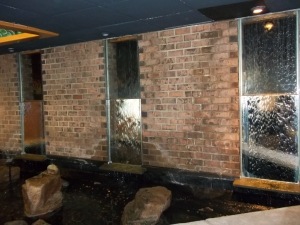 The seventy year old says “Yes, I had him my Senior Year … three years ago.”

The sixty year old says “There’s a blog entry in here somewhere …” and takes a picture of the water feature.

Personally, I think the answer is D) None of the above – they did it for the sheer entertainment value of the thing.

The three Little Old Ladies are among the funniest, most lively people I know … but then I might be just a teeny little bit prejudiced.

Halfway through the meal it was discovered that of the five, there was one person in each of five decades of life. Forties, Fifties, Sixties, Seventies and Eighties.

Turns out happiness comes in many forms.

And it’s all great.

1 thought on “An Anthropologist, A Mathematician And An Eighty Year Old College Student …”