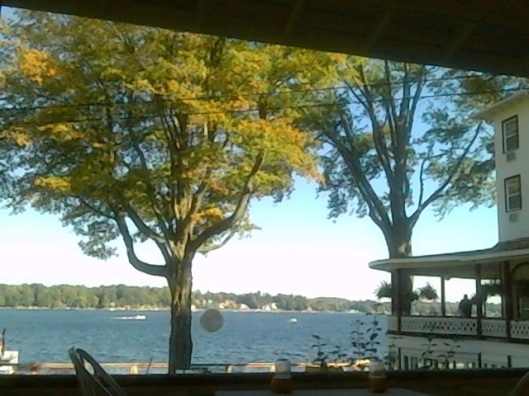 That was the plan you know …

I was invited to do one more weekend at the lake. And since it was included, who was I to argue?

So here I sit. Out on the porch. You know, the porch I have been sitting on all summer long … at least on the weekends.

Always a lot of fun. A lot of nice people. Seeing lots of weddings and family reunions. All of it.

On the way up, I decided to stop at a Hardwood Mall. The kind of place where they basically provide hardwood flooring and whatnot at wholesale prices. I do have a kitchen that still needs to be done, so I went around the construction to the Outlet.

That’s all right. Things happen for a reason. On to the lake. And my stomach was getting grumbly.

Lack of food will do that.

Looking forward to a foot long hot dog from Eddie’s and a frozen custard cone from Hank’s I set out for the lake.

The Hot Dog place was closed.

Further up the road, the Ice cream place was closed.

I was thinking that maybe they had closed for the weekend, so I didn’t feel too bad. It’s not like I only missed it by a few minutes or anything, right?

Pulling into town, as I passed the Winery the sign on the front changed. Winery closed. Not that I was going to go there. But still.

Further up the road another store closed as I drove by. They really are serious about rolling up the sidewalks at 6:00 it seems.

On to the Hotel … where the Internet was spotty at best. So I sat in the lobby to check in and do posts and whatnot.

As buzzsaws started outside and people started to scream.

… more horror than anyone can stand. Over 2 hours to make it through if you can. New for 2013 the all new 13 level of fear at ghost lake. The haunted amusement park has exploded into 13 levels of fear. Much more terror than ever before.

Yeah, I saw the level of fear here in the hotel outside when I came in.

It loses something in the light of day, I guess.

“It’s really cold here in the lobby” (no it wasn’t) “That must be because there are ghosts all around here.” (no there aren’t)

Young woman screaming and affecting fear while “hiding” behind her big brave 102 pound boyfriend. “Oh. I’m so scaaared. You’ll have to proteeect me.”

Kids looking in locked darkened bar door … “And see over there? I looked there and there was somebody … and then they were gone!!!” – Dad smiling indulgently at me. The place they saw ghosts was also coincidentally the way employees get from their quarters upstairs to the outside door.

But I’m sure it was a ghost they saw.

“I’m not real either” I said to them. They looked at me sitting in the super antique chaise lounge … and I wondered how that story will be retold. Dad laughed.

Then as that thought ran through my mind, the fire sirens went off … in the middle of the night … 3:14 to be exact.

The last time there were fire sirens it was to signal the burning of the Beach Club here. A quick check to make sure neither the Park nor the Hotel was burning and I was back to reading my book.

Thinking today would surely be a better day, I went downstairs to get some coffee … to talk to the other folks who are up early … and to sit on the porch here.

No one was downstairs. No one was on porch. No problem.

It is always nice here sitting looking out onto the lake. So after checking the morning emails and whatnot, I tried to organize the blog with a new category for Lake.

Halfway through it all, the internet connection went away. And I lost it all. Oh goodie. Another great start.

Suddenly a flash of something scared me out of my wits. Looked like something … a big bug maybe … fluttering down to my arm. But then there was nothing. A few times this happened. Me seeing it out of the corner of my eye again and again. Looking everywhere and seeing nothing.

Leave it to then to be the time Bill showed up. “It’s a Ghost Bird.” he said. Obviously he does not know my history with birds.

Then laughing, he pointed to the couple of birds fluttering outside the porch in the sunlight … casting dark shadows on me and the chair here.

No ghosts here. No siree.

Up walks a Black Cat. Which sits at my feet looking up hungrily. Which reminded me. I was hungry too.

And of course the Restaurant named after the resident ghost was closed for breakfast.

A quick Sheetz run was in order. (Sheetz Run: A quick trip to the local quick shopper to get basic sustenance at outrageous prices) They had no donuts like I liked … the ones filled with jelly or cream or anything … and I went directly to two Hot Dogs … the breakfast of champions.

It was mid morning after all, I rationalized.

Returning to the Hotel, I was greeted by the gal who handles the rooms. “Need anything?” she asked.

“No everything is fine with me, thanks. The room was great. Thanks for cleaning it this week.”

Back in my room two minutes later I used the facilities … and the Toilet broke. And this was not one of those “put the chain back on” or “attach the little tube” type broke. This was a “little plastic zip tie falling apart in the middle” type of broke.

So I reported it to the powers that be and have resigned myself to a weekend of reaching into the toilet tank to open the valve thing to flush the toilet.

Figuring I deserved a bottle of pop to soothe my nerves, I went to the pop machine on the porch. We northerners originally from a certain city call it pop, not soda.

The Pop was wrong. And by wrong I mean it didn’t give me the type on the button.

I was thinking of going on the Ghost Tour tonight … but maybe I’ll just stay in my room and drink my CheerWine.

Gonna miss this place when I leave.