Up until a few months ago I had never heard of Suspended Coffees.

Sure, I had seen the movie Pay It Forward, and am a big fan of Random Acts of Anonymous Kindness. I had seen where stars paid people’s layaways off around the holidays. And I saw various posts on Facebook about folks paying the bill for the next person at a drive-thru or restaurant.

But a Suspended Coffee?

I’m thinking I must have heard something about it at some point … because when I came across this Facebook page several months ago, it felt pretty familiar.

An article about Suspended Coffees

In a nutshell … you go to a coffee shop … you buy your coffee … you pay for two coffees.

The extra already-paid-for coffee goes into a kitty of some kind … a holding area, as it were … waiting to be claimed by someone who might not be able to afford a coffee that day.

All I can say is that they do really cool posts on Facebook … and I and a few friends think it is a good idea.

Today is the one year anniversary of the whole thing on Facebook. And they have their own Website. And if I understand it correctly they are trying to drum up some money on Indiegogo.

So in honor of their birthday today, I decided to give them a free plug. Sort of a Suspended Blog Post or something. Here is the blurb.

Do it. The Suspended Coffee thing. It will make you feel good. I promise. 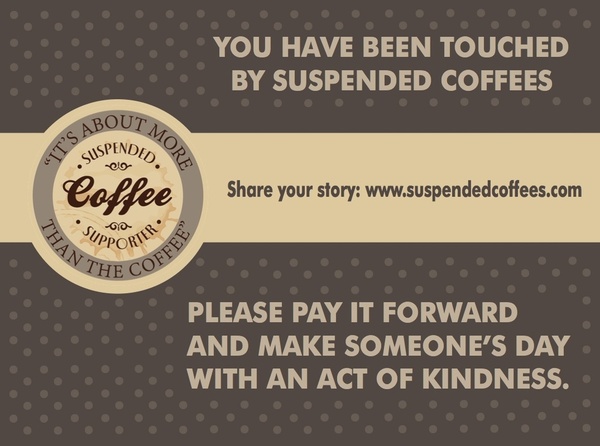 Hey! My name is John Sweeney. One year ago I launched a new Facebook page dedicated to Suspended Coffees https://www.facebook.com/SuspendedCoffeess.

What is Suspended Coffees? It’s an idea that is changing the way people drink coffee, one follower at a time.

Suspended Coffees is a movement that encourages charity through human kindness. While aimed toward help those in need, it has warmed the hearts of thousands of people across the globe. It’s as simple as purchasing an extra cup of coffee at a participating café for someone who needs a warm beverage. Some cafes also offer suspended snacks and meals.

Here is the story of how it all began. A couple of years ago I was in a coffee-house with a friend giving my order at the counter.  When we approached our table, two new customers entered the café and said: “Five coffees, please. Two of them for us and three suspended.” The pair paid for the order, taking only two of the coffees, and left the café.  I asked my friend: “What are those ‘suspended coffees?'” He answered, “Wait for it and you will see.” Another group of people came into the café, ordering seven coffees, although there were only three people in the group – one coffee for each of them, and four “suspended”.

Stunned, I still didn’t understand what these suspended coffees were all about.  I sat and sipped my coffee, basking in the warm sun, admiring the beautiful view of the square in front of the café.  Suddenly a bedraggled looking man dressed in shabby clothes walked into the café and asked the clerk at the counter: “Do you have a suspended coffee?”  They did.  He got a coffee for free – no charge – he sat down and took a sip and a smile came over his face.

That’s a suspended coffee. A simple concept that allows people to pay in advance for a coffee that is then given to someone else who cannot afford to pay for their own warm beverage. This tradition started in Naples, and it has now spread across the globe- with a twist because in some establishments, you can order not only a suspended coffee, but also a sandwich or a whole meal.

The 27th of March 2013 was only the beginning. In a year the progress and support has been heart-stopping.

•March 2013, John Sweeney launched the Suspended Coffees Facebook page: within 8 hours of the page’s creation, the movement had over 20,000 followers.

•Then, motivational speaker Scott Sonnon shared the Suspended Coffee movement with his followers and support soared to over 200,000.

•Today, Suspended Coffees spans the world with over 700 registered cafes, with at least one on every continent.

Through fundraising, and with the help of a small, dedicated team of volunteers, Suspended Coffees has experienced exponential growth and acceptance.  In one year we have successfully expanded from one man and an idea to a team of committed volunteers being engaged with more than 260,000 fantastic suspended coffees supporters and a network of over 1000 registered cafes.

Wow! Yes, since setting up the first Facebook page, something wonderful happened – people loved the idea and wanted to act on it.  Getting the word out is has been group effort with lots of people giving their skills, time and services freely – to raise awareness, to create web sites and videos, to put together information packets and marketing materials, talking to cafes and friends about suspended coffees, involving friends, kids, colleagues, customers, radio stations, newspapers.

“It’s about more than the coffee.”  The “more” refers to the hundreds of acts of kindness, shared daily on the Facebook page and encouragement for followers to hit the streets and pay it forward.

When we hear about your suspended coffee experiences, we want to ensure your example is shared with others – through social media, on our web page, in our cafes.  We’ve created Suspended Coffees printable flyers for anyone to use to help spread awareness of the Suspended Coffee movement.  There is also an inspirational video that explains how it all works.  You can find this and much more on our web site at www.suspendedcoffees.com.

Thank you for helping us to create a groundswell of interest based on the concept of kindness and sharing.  THANK YOU – for loving the simple gesture of a suspended coffee; for creating and sharing your stories; for helping to get the word out; for talking to your local cafes and coffee houses; for opening your hearts and reaching out to help someone who needs a kind hand; for leading by example.  We didn’t get here on our own; and we can’t stay strong without your help.

What’s the future hold for Suspended Coffees?  With our first anniversary of March 27, 2014 we are committed to keeping the Suspended Coffees’ momentum growing.  Future plans include forming a charitable, non-profit organization, working with local groups promoting Suspended Coffees and helping children and families get off the streets.

Please help us to create the best experience for you, our Suspended Coffees supporters and the growing network of participating cafes, and of course, the recipients of your suspended coffee gift.

Other Ways You Can Help

Even if you can’t contribute, it doesn’t mean you can’t help:

Other Ways You Can Help. If you can’t help fund through monetary contribution, please get in touch to learn how you can help us spread the word locally in your community.  And of course, please keep doing what you’re doing – buy a Coffee or food item for someone down on their luck.
With your help, we can keep Suspended Coffees at the forefront
—
Thank you.