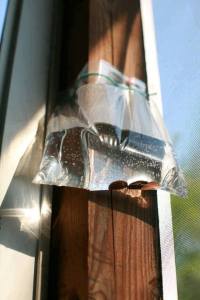 I hate flies in the house. I hate stinkbugs more. There aren’t too many flies around here fortunately.

Thanks to a friend of a friend named Barbara, I discovered an old Amish trick today to keep them outside of the house.

You put a few pennies in a Zip Lock Baggie along with some water. And voila! No more flies.

Here is a copy of her commentary:

We went with friends to a restaurant on Sunday for lunch and sat in the patio section beside the store. We happened to notice zip lock baggies pinned to a post and a wall. The bags were half filled with …water, each contained 4 pennies, and they were zipped shut. Naturally we were curious! The owner told us that these baggies kept the flies away! So naturally we were even more curious! We actually watched some flies come in the open window, stand around on the window sill, and then fly out again. And there were no flies in the eating area! This morning I checked this out on Google.
Below are comments on this fly control idea. I’m now a believer!

Zip-lock water bags: #1 Says: I tried the zip lock bag and pennies this weekend. I have a horse trailer. The flies were bad while I was camping. I put the baggies with pennies above the door of the LQ. NOT ONE FLY came in the trailer.The horse trailer part had many. Not sure why it works but it does!

#2 Says:Fill a zip lock bag with water and 5 or 6 pennies and hang it in the problem area. In my case it was a particular window in my home. It had a slight passage way for insects. Every since I have done that, it has kept flies and wasps away. Some say that wasps and flies mistake the bag for some other insect nest and are threatened.

#3 Says:I swear by the plastic bag of water trick. I have them on porch and basement. We saw these in Northeast Mo. at an Amish grocery store& have used them since. They say it works because a fly sees a reflection& won’t come around.

#4 Says:Regarding the science behind zip log bags of water? My research found that the millions of molecules of water presents its own prism effect and given that flies have a lot of eyes, to them it’s like a zillion disco balls reflecting light, colors and movement in a dizzying manner. When you figure that flies are prey for many other bugs, animals, birds, etc., they simply won’t take the risk of being around that much perceived action. I moved to a rural area and thought these “hillbillies” were just yanking my city boy chain but I tried it and it worked immediately! We went from hundreds of flies to seeing the occasional one, but he didn’t hang around long.