I woke to see this in my notes. She is now “Following” me here on FB. Obviously because I endorse a healthy lifestyle and lots of physical exercise.

Friend of any of you? 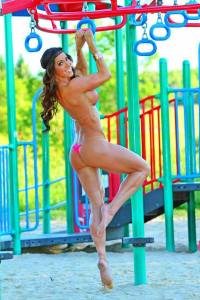 The comments started. “Well, uh . . . she certainly does look very healthy” and “I can’t believe her mother let her out of the house dressed like that !”

“That is one of the problems of having people follow you rather than having them as friends. This is probably a fake picture and you are really being followed by a CIA operative. Or the GOP.”

If it is the GOP or the CIA or any other letter combos, they are going to be sorely disappointed when they find out the real me.

The real me has been looking forward to meeting yet another Online Dating person. This one has been patiently waiting … and we’ve been trying … since the Spring. And tomorrow is the day.

So of course I got my hair done.

Oh. Did I mention it has been raining off and on for a few days? Have you seen what rain does to my hair? But I digress.

The good news? I called to let them know, and one of the guys from the station came out and changed my tire so I wasn’t late for my shift. Or as the station manager said when I got there “Hey, if you can’t ask us to help you, who can you ask?”

Did I mention that my trunk … where the spare was … was also full of things from my Mom’s recent kitchen downsizing? And said things are now filling the back seat and floor of my car?

Did I mention that it has been raining? And standing in the rain … the tire … the greasy dirty tire … my clothes … I think you get the picture. It’s not pretty. This ought to impress the daylights out of him tomorrow.

And in the final chapter of A Perfectly Awful Horrible Day … yes … there IS more … and I’m going to skip the whole gasoline / price / carwash misunderstanding.

On the way home I decided to get a root beer float at The Meadows. The Ice Cream place, not the Mental Facility.

Flavor of the day? No good. No problem. I wanted a root beer float anyway. I saw a sign for some new something or another so I asked.

“Great day for ice cream,” he said “the new mini-splits are like half banana splits … 50 cents off. All the sundaes are half off. Ice cream is …” and on and on.

And I proceed to tell him about some of the crummy events o’ the day. He shares a funny story about some strange folks who came to the place and goes off to make the Black Cow.

A minute later he comes back, opens the window, and puts his head down on the counter … his forehead resting on his arms.

“I can’t believe this … and I feel really bad telling you this … but our carbonation machine just went out. It’s broke. The root beer is flat.”

Of course it is.

I am now sitting here slurping on a root beer sundae. With flat root beer. I don’t care. It tastes great.

1 thought on “Boomer Dating And The Perfectly Awful Horrible Day”