So. Ask me how my day went.

Well. In anticipation of a “big meeting” at work this morning, I got all duded up … OK … more like dressed appropriately. So that meant nicer slacks, etc.

And headed out to go to work. 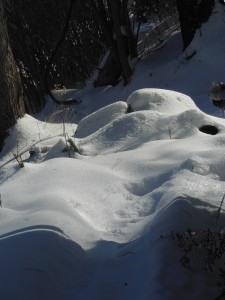 Have I mentioned that it has snowed / rained / iced / whatevered here? A lot?

And that my idea of fun is decidedly NOT going out and shoveling … over and over again … as the plow plows yet another round of “stuff” in my driveway and in front of my steps?

I made my way down to the car … which was at the bottom of the dozen steps to the road. Steps not totally cleared … and now ice-covered snow-covered.

At the bottom … being glad that I didn’t have to shuffle through a foot of snow like on other days … I confidently stepped onto the top of the stuff between me and my car.

And my foot immediately plunged down … through the ice … down through the foot of snow / frozen slush / etc … to the bottom.

Nowhere to grab for support, I yanked my foot up.

And up came my foot.

Minus my boot. Minus my sock. In 2 degree cold.

Nothing to hold onto … and I can’t get my foot back into the boot.

Had to stand … on the ice … in one bare foot … while trying to yank out said boot which is stuck in the ice / snow / slush bank.

Got the boot out.

Was unable to put it back on though … while trying desperately to balance on my right foot on top of the lumpy ice-covered rest of it all.

Just then, the school bus came by … and I am walking to my car. Holding a boot in one hand … with one bare foot … on the ice.

So I got in the car … jimmied it out onto the street … cleaned it off … and went to work.

Good meeting by the way. Good day. And the morning went by quickly.

Flash forward to afterwards … after work … after picking up Texas Linda and running to the store for an AT&T card for my cell phone (no, I didn’t get the expected gas points … no, I was not happy about that)

So I came home here … and decided to take a run up the driveway in hopes of getting into the garage.

Made it thisclose from the entrance to the garage. Instead of leaving it there, I decided to back out and give it another run.

Right at the bottom of the driveway. Halfway out into the street.

On a mound of icy snow … basically the same snow plowed mess I had stepped into further up the street first thing in the morning.

As I got out and was kicking away snow / ice to try again … my next door neighbors pulled up. They, in their early 60’s. He a professor at the campus. She a researcher of some sort.

Me: “Can you believe this? I wondered if your son still lived with you. I was thinking I should have contracted with your son to help me out this winter.”

He: “Yes. Yes he does still live with us”

So. They offered to get out and push my car out into the street.

Suffice it to say there were several back and forths …

Until my car broke loose … and flew out into the street.

And they … both … fell ass over teacups … headfirst into the snow bank.

I assured them I had good insurance. They laughed.

They also recommended a man who had plowed THEM out yesterday. (They have a steep VERY long driveway)

“Jo-Jo” will be here within the hour.

1 thought on “Why I Hate Winter … And Wintery Stuff”