I wanted to wax poetic about our current Pennsylvania Governor Tom Wolf.

Wonderful man. Truly wonderful. And tomorrow I want to tell you about him. First let me summarize the previous one.

Who allowed fracking to be licensed IN STATE PARKS …

Who transferred that Philly unemployment work to Altoona (but not before he cut staff there and cut the hours of operation).

Who tried to sell off every money-making state-owned enterprise to his cronies.

Who wanted to eliminate pensions that folks worked for their whole lives.

Who ran an ad in which “he” pulled up in his big gas-hog Hummer, beside Wolf’s old used Jeep (which reminded us that we drive “old used Jeeps” too … and pay outrageous gas prices thanks to the gas tax)

Who despite his pro-business rep, maintained the second-highest corporate net income tax in the country

Who raised the taxes on gas and diesel fuel to the highest amounts in the country.

Oh, and who would not accept the freely given Medicare expansion money to insure the uninsured folks like me.

Oh. And the best?

THE DAY he got into office in 2011, he cut funding for post secondary education.

In the primaries, which in PA are separated by party, there were five people vying for the position on the Democratic side.

All five polled ahead of Mr. Corbett in popularity.

I hoped other felt as I did about the man.For what it’s worth about a third of the die-hard Republicans in this area wrote Wolf’s name in on that side on the ballots.

Turns out lots of others agreed in November.

At one point Governor Corbett was behind by 30 points in the polls. Usually they win by more than 23 points. Corbett lost by more than 10 points.

And yes, I feel much better having written all this. Thanks for asking. 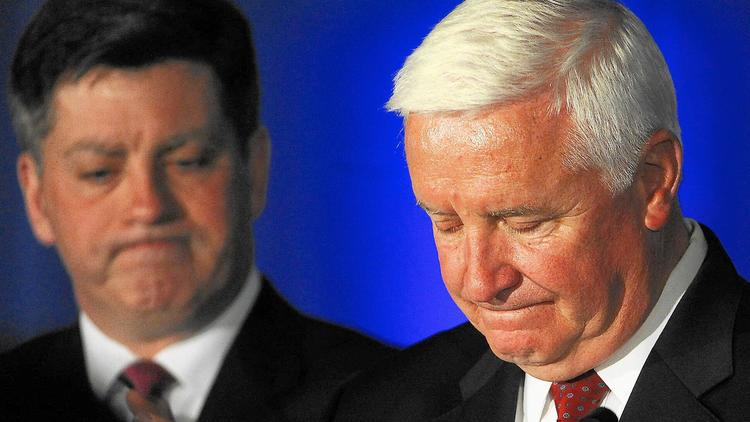 One Term Tom in defeat.