… but maybe not in infamy.

That’s the day I started writing.

Not here. Here came in the middle of the following year.

I didn’t realize till much later the cool date it all started on. I, being a numbers person and all, think that 11/1/11 is exceedingly cool.

Looking back … as they do on Facebook … I see that this was the day I put the picture that later became my picture here.

And I began my first NaNoWriMo.

Only having learned of it the day before, I became what is now called a pantser.  That means I wrote, but it was kind of like flying by the seat of my pants.

This is also the day in 2013 that first stumbled onto the site that is “A webcomic of romance, sarcasm, math, and language.” … xkcd.com

It’s weird. But it makes me laugh. 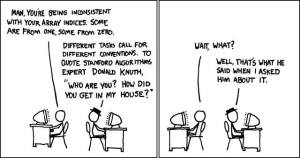 Which brings me to today.

Another November. Another NaNoWriMo. Another opportunity to write … something.

This year I’m adding something new to the mix. NaBloPoMo. Each day I’ll write something out here. On the blog. For the month of November.

Kind of like I did back in April of 2013. When I not only did a Script Frenzy for the month, but also wrote “poetry” of a sort each day out here. NaPoWriMo they called it.

It appears my hypocrisy knows no bounds.**

Bonus points if you know where I just shamelessly plagiarized there. One of my all time favorites. Still reminds me of that time … when we watched … and we danced.

Which brings me back to … writing. And what got me here.

This is the fifth time I have started NaNoWriMo on a bright (or not so bright) November first day. Unlike the day in 2011 my heart is not shattered in a million pieces. Like many years before I don’t hold out much hope that this will produce the next Great American Novel.

** It was Tombstone (1993) Doc Holliday Played by Val Kilmer. He was no Sam Elliott, but then very few are.