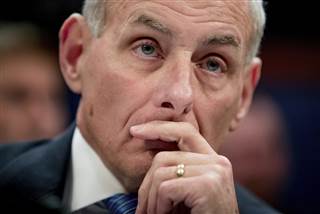 Things being what they are in DC … I just read that they are figuring they’ll just force people wanting to come into the country to hand over their social media accounts and passwords.

Homeland Security Secretary John Kelly told Congress on Tuesday the measure was one of several being considered to vet refugees and visa applicants from seven Muslim-majority countries.

“We want to get on their social media, with passwords: What do you do, what do you say?” he told the House Homeland Security Committee. “If they don’t want to cooperate then you don’t come in.”

They are going to get accounts and passwords, eh?

So let’s see if I have this right.

A Safe Person … hands over account and password. Gets harassed up the wazoo and back. For nothing. Gets booted.

Goes back to become radicalized because they were treated so badly. Figures the terrorists were right after all.

A Terrorist Person … makes a second account. Posts puppies and kittens and whatnot for a decent amount of time. Hands over second account and password. Gets in.

How hard was that?