Never let it be said I don’t go to every length to do a Happy Holly Project entry for my readers to enjoy … and of course to make me happy.

Today was one of those hot humid days that we have sometimes here. And in reality, the thing today that made me happy actually started last night.

As some of you know, I do “the voice” on NPR up at the local NPR station. This mostly entails me sliding pots up and down, pushing buttons and saying important things like “All Things Considered is brought to you by listeners like you … and … the Joe Schmutz Car Lot .. selling great cars … online at joeschmutzreallygoodusedcars.com” or “the weather tonight is really weathery … and will be tomorrow, too.” and stuff like that. In my best deep radio like voice.

So as I left last night after doing my shift, my mind was elsewhere as I pulled out on the road … and I soon found myself driving down past the Beaver Stadium … and on into town. Suddenly … as if out of nowhere … I saw the most magnificent fountain lit and running and … well, magnificent. 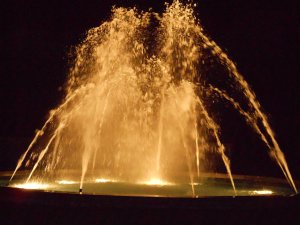 So of course I had to turn around and pull into the small park beside it so I could take a picture. As I pulled in a voice came from the car leaving the park …

“Hey Ma’am? Excuse me, Ma’am?”” and I realized it was a police car … me and police cars … but that is definitely a story for another time.

Backing up to talk to the nice gentlemen, I said what any woman would in this position. “Yes?”

“The park is technically closed at dusk here.”

“Ah I see … well I was just taken by the absolute beauty of that fountain. I don’t think I have ever seen it before. And I was really hoping to get a picture of it.” I rambled. “Is there any other place I might be able to go to get a quick picture of it?”

Looking at each other, the younger officer responded, “Well, just go and take the picture real quickly. You really shouldn’t be in here, but we don’t care.”

Well, if they didn’t care, I certainly didn’t care. So I grabbed my camera and took off across the grassy area to the point where I could take a few pictures.  And as I took the pictures I looked into the viewfinder … and realized that the pictures were even nicer than the real thing.

So just for good measure, I took a few pictures of the glass sided highly lighted building across the street.

And it all made me happier than anything had that day … except I had already done my blog for the day in advance of my NPR shift.

Walking back to the car I suddenly realized … I would be coming back to the station Friday afternoon …  and I could get pictures of the same things by daylight for my blog here on Friday … as well as a few other things.

And other things it was.

As you may have guessed by now, yours truly forgot … if I ever knew … that tomorrow was a Home Football game for Penn State. The Home Opener at that. And against Ohio State.

So late Friday afternoon before the game might just not be the best time to be going around taking pictures and doing research.

But hey, this is my blog and I do what makes me happy … and maybe you too … so off I set in the general direction of the magnificent  fountain for a daytime shot.

First, though, I had to pass the legendary Beaver Stadium. And there was the typical gathering of all the RV’s in Paternoville … now called Nittanyville … otherwise known as the large grassy area outside the stadium that turns into a mud hole when it rains. And folks were lining up already for that. 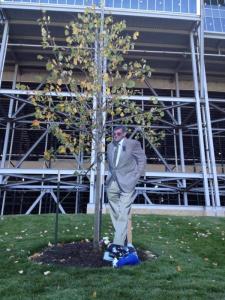 Turns out there was a life-sized cutout of Joe Paterno standing where his statue used to stand. There were too many people and no parking spaces for me to stop and get my picture taken there though.

So off I went in pursuit of the fountain from the night before. But first … the Creamery. You may recall the creamery from my other post when I went in and got some Peachy Paterno Ice Cream. And someone mentioned that was fine as long as I didn’t get Pecan Sandusky.

And I wondered if either was still there … and if Pecan Sandusky ever was there.

So of course I had to go to the Creamery … and there was the sign pointing down the street.

As I pulled into the garage, I talked to the man in the booth … and asked him if there was ever Pecan Sandusky Ice Cream. “No, I don’t think there ever was … and I would know if there was. But I knew all the people in that Sandusky trial.”

So I excused myself … parked my car …  walked around the corner … and ran directly into a long line of people waiting for ice cream at the Creamery.But feeling a little like a fearless reporter, I stood in line … making small talk with those around me.

Learned a lot about William and Mary College … the Gators … and new courses at Penn State … but nobody know about Peachy Paterno or Pecan Sandusky.

When I finally reached the counter, I learned that to the best of the knowledge of those folks there had never been Pecan Sandusky … Peachy Paterno was still on the menu … and I got Black Walnut Frozen Yogurt. Maybe I felt a little guilty that I did not get WPSU Coffee Break Ice Cream … in honor of the NPR station …

I make a mean Black Walnut Fudge at Christmas. But I digress.

Hopping back in the car … complete with Black Walnut Ice Cream melting and running down my arm … I came to the fountain … and the park. And the gazebo in the park.

So I sat in my car and dutifully finished the ice cream cone … then set off to take the desired pictures.

Of both the fountain and the building across the street.

And just for good measure, I dipped my hands in the cool water to remove the remnants of Black Walnut Ice Cream.

After all, fountains are fountains. 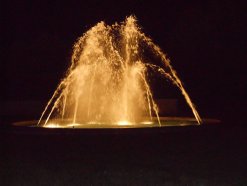 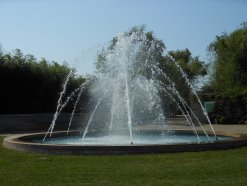 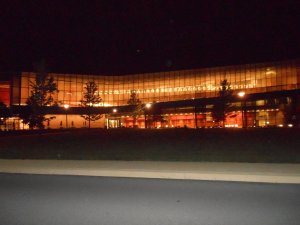