I am not sure the first time I saw a stink bug … it has been more than a few years. At  the time I feared my house was infested with something awful.

This picture makes it look far nicer than it really is …  and far less like a miniature pre-historic pest.

Thank goodness they do not bite … but as far as I can tell that is its only socially redeeming characteristic.

When you squoosh them (technical term) they smell like grass … kind of. Hence the name … stink bug.

According to the wise Wikipedia, the brown marmorated stink bug was accidentally introduced into the United States from China or Japan. It is believed to have “hitched a ride” as a stowaway in packing crates. The first documented specimen was collected in Allentown, Pennsylvania, (a little over 200 miles from here) in September 1998.

As of November, 2011 it had spread to 34 U.S. states. I am guessing, since it is almost a year further down the road, that the tally of stink bug states has grown even more.

It had been so long since I saw one of these little devils that I actually thought that perhaps they had moved on … and out of Pennsylvania.

I did say I was an optimist, right?

And now I step back to my stink bug experience, such as it has been.

Several years ago, living in not nearly enough sin with a gentleman a year or two younger than me, we saw a small bug on the wall. This was not unusual since this house is out in the country, more or less, and is surrounded by trees.

Before he could squash it I jumped up and in one swift move picked up the bug with a kleenex and delivered him safely out the second story window to rejoin his family and friends.

In short order there were more bugs … appearing every night on the windows. At this point I was still using kleenex … but instead of freeing them all, I was freeing them to another existence.  (read: I killed them)

Several weeks and several boxes of kleenex later, I realized the economic advantage to using and reusing a piece of paper … a discarded envelope perhaps. And I kept the bloody envelope for far longer than the kleenex lasted.

They appeared to come from the windows … and seemed to be attracted to the lights and heat … and maybe a sugary drink or two.

But mostly I found myself examining around the ceiling corners and the windows for the little devils each time I would go into the bedroom.

Going through several envelopes I began to become more and more aware of their defensive strategies. When you approached them, they would play dead and lean away from the window to drop to a lower place … the floor perhaps … and make a hasty getaway.

This, I found was circumvented by putting the envelope under the place on the wall where they might be and move upwards in the squooshing motion.

And their numbers increased.

Although during the summer their numbers diminished, there were always a few of them around. Even when travelling to Maryland to bicycle, there were stink bugs in the motel windows and on the park picnic tables.

One year on a particularly horrid day, I opened all the windows upstairs since there was a wonderful breeze coming through.

Not to be daunted, I began to get into the hunt of it all … keeping count of how many of the little guys I had liberated into the next life.

I also lost all hope of sympathy for the little pests, and started squooshing them with my thumbs.

It’s not that I have anything against them particularly, but they need to stay outside my house.

I decided to do some research into how to get rid of these bugs … and quickly discovered there was no sure-fire way to do it. 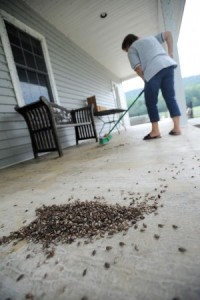 I also discovered that I had it easy compared to some folks further on down the road. The picture is of the stink bugs in Maryland.

And none of the techniques to get rid of stink bugs seemed to work.

But the final straw came when last year I was emotionally grieving. I closed my eyes in prayer, tears running down my face.

When I opened my eyes there were several ladybugs … on the walls and on the windows.

It cheered me so much. Surely this was a sign from above that things were going to be all right with the world and better times were coming.

I became a big fan of ladybugs. I read about all the traditions associated with ladybugs and smiled each time I saw them on the wall.

Then they seemed to disappear. Except for a few wings here and there.

Resorting once more to the amazing internet I discovered that Stink Bugs eat Ladybugs.

It was all out war.

Then I saw the words that made me smile.

Some species of spiders and praying mantises will attack adult stink bugs.

This house has perhaps the best spider population this side of the Mississippi. The basement looks like something out of a horror movie with all its spider webs.

Silly me, I had been sweeping them down on a regular basis.

So did the stink bugs.

And there were many ominous Stink Bug carcasses caught in many strong spider webs throughout the house.

Last week I saw the first stink bug I had seen in many, many months … on the window in my bedroom. I killed it. And immediately shut all the windows upstairs.

I hoped fervently that it was an aberrant orphan.

Yesterday I killed four of them.

In the last hour I have killed eight.

One thing you need to know.

There is no such thing as an orphan stink bug.