But it was  such an unintentional mistake.

I mean, it was just there and so I did it.

Allow me to explain.

For those of you who are frequent followers of the blog here, you are aware that I am in dire need of a new roof. And that recently God moved in mysterious ways by providing a Hurricane to cause my roof to really, really need a new roof.

So as I wait for the insurance check to come back from the Home Equity firm … they swear it will be here by tomorrow … and no, I am not holding my breath … I am instead taking bids from possible contractors.

I live in an area that has a modest Amish population. Not to be confused with a modest Mennonite population several miles away.

And they do excellent work. Reasonably priced. And my neighbor is having his roof done by them.

Which leads to why I got a call from said Amish Man this morning from their small phone shed at the base of the unpaved road … a phone that five families share. And the questions began.

Could he come to my house today to do some measuring? And would I mind coming to get him and take him back home afterwards? Oh, and did I mind making a few stops before he went back home?

Then the comment that made me start to wonder … “OK, then I have to go up and ask my Mother and Father and I’ll call you right back.”

Far be it from me to question the age of consent in another culture. And a roof is a roof is a roof. And they are well-known in the area for their excellent, well-priced craftsmanship.

Flash forward to my driving out to the country to get Jacob. Yes, Jacob … and as he proudly told me, his uncle was Jacob, his cousin was Jacob, the man down the road was Jacob … all with the same last name.

I’m thinking there are a lot of Amish Jacobs out there. And he is one.

One that looks to be about thirteen years old.

I was told later that he was twenty … but I digress.

Measurements were measured, notes were notated, stops for bulk groceries were stopped, and we once again found ourselves on the way back to the homestead.

But instead of the main way I had taken there, he suggested a way using a larger highway … followed by several barely paved roads. And roughly twice the distance. But it was a beautiful drive.

Now you know me … the lady who has a camera in her purse at all times? The one who captures photos of license plates at the drop of a hat? Did I mention Jacob wore a hat? 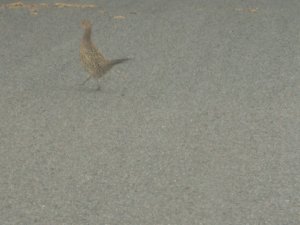 When suddenly there were several beautiful ring-necked pheasants.

No rule against taking pictures of them, so I whipped out my handy-dandy Nikon and snapped away.

Jacob helped by putting his window down and pointing out several ones I had not seen.

Turns out the man up the road raises them, leaves them out free, and lets folks train dogs with them and shoot them for food.

And I did take pictures of them and other things … see?

But I also took the picture at the top of the page … of Jacob … and his hat … the pheasant ducked into the overgrowth just as I took the shot.

So now the dilemma. Should I use the picture of Jacob?

Or should I just pretend it never happened and delete it?

I am pretty sure none of the Amish follow me on Facebook or WordPress, so the chances of him being recognized by friends are pretty limited.

But what about his soul?

First things first:  I  can’t tell you how many times I’ve been asked, “Isn’t taking photographs of the  Amish against their religion?”  Answer:  NO, it’s not against an Amish person’s religion to be photographed.  The Amish religion does, however, prohibit  POSING for photographs.

Well, he definitely didn’t pose. Not so sure about the hat.

I guess I’m pretty sure I didn’t capture his soul or anything. But I’m pretty confident his hat is going directly to Hell.

So now the big question …

Can a man with no soul still put a roof on my house?

6 thoughts on “Did I Steal His Soul?”