But every time I have tried, it has come up with nothing.

Yesterday, I was about to leave the house for the day. And coming down the steps I remembered that I had left my camera upstairs. The thought flashed through my mind “If you leave it there, you will surely see something that you will wish you had a camera for.”

So back up the steps. Camera in purse.

As I opened the door I heard the distinctive sound of the Red-Tailed Hawk. And thought I saw some activity in the tree tops in the property beside mine. So I raised the camera and took a few shots of what appeared to be nothing but trees.

Holly gets into the car. Grumbles something about never getting a picture of the birds. And hears the sound again.

With camera in hand, I drive a few feet up the road and see a Hawk. In the trees. Far up above me. And take a picture. Or three.

As the FedEx truck makes its way down the road here … you know … the road that never has anyone on it … I caught a flash of white in the very, very top of another tree.

Yes, I know he had to wait. Too bad. I snapped a few shots and went to meet a friend for an early lunch.

Looking at the pictures I saw that I had indeed gotten a picture of said Red-Tailed Hawk.

The rest of the day was filled with lots of driving and doing and whatnot. So I was not able to download the pictures until a few hours ago.

CAVEAT: I should apologize for the lack of photographic excellence. I’m not a real photographer. I just like cool looking things.

FIRST, let me show you two pictures that I got from the street. Right before the FedEx truck came. 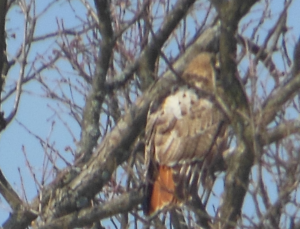 I was doing mental backflips over these two pictures. Finally, I had gotten the elusive Red-Tailed Hawk on film. And in a tree not thirty feet from my front door.

Then, on to blow up the picture of that white item far, far up in the tree tops. Maybe 80 to 100 feet up and away from the street. Me, wondering if it would be some other odd object like the hoop I had found in the tree by my house.

SECOND big shock of the day. It was not a picture of some white paper or other object d’art. It was a picture of a bird. A large bird. A hawk sized bird. Except this bird appeared to be a white version of the Red-Tailed Hawk. 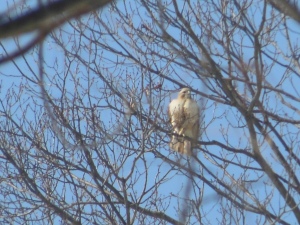 Do they even make White Red-Tailed Hawks? Or is this something else? All I know is that it was one giant bird up there. And I don’t think it was a Bald Eagle. Although I have seen them one valley over in years gone by.

Then right as I was about to close the PC down for a while, I decided to blow up one of the shots I had taken from the door of my house. You know, the old “I can see Russia from my back porch” kind of thing. Which led to the …

Not to be confused with the White one.

So, if I am not mistaken, it appears that in our neighborhood here we have not one, not two, but at least three Red-Tailed Hawks.

And yours truly got pictures of all of them.

It has been a good day, indeed.