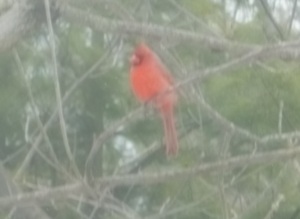 Yes, I know. I’ve not posted anything for two days.

Stuff has been going on here.

I’d like to say it is all good stuff, but as stuff goes … it is not.

Mostly I’ve not shared with anyone.

With some I’ve shared part.

And in true Holly fashion with nobody have I shared everything.

I saw or experienced four things today that each touched me a bit. And I will share those with you.

First was the Cardinal. One of these days I will tell the story of why the Cardinal is such a meaningful thing in my life. It lets me know that things are going to be all right.

Suffice it to say I’d not seen one or heard one since last August. A few days back I heard one. And today I was able to get a grainy picture of one right outside my house.

The hunt is on. I will get a better picture. And hopefully this will not take me a year to get like the ones of the Red-Tailed-Hawks the other day. 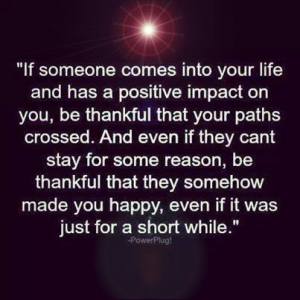 Second, the picture. Or more accurately the meme. The picture with words superimposed. I like these words. They speak to me today.

As I saw it, I realized how true this should be in my life.

Not that I have gotten to this point quickly, or at all in some cases.

But how sage the words.

Be thankful your paths have crossed. Because they didn’t have to cross. And maybe it was a long shot that they did cross. But they did indeed cross.

By focusing on the fact that they made you happy, even if it was just for a short while, it somehow takes the sting out of the loss … if only a little bit.

And as friends get to the point where they have peace and closure about long divorced exes, and I do the same, what a blessing it is to be able to look at a life’s experience for the good that it has given us.

The third is an article I came across today in the Elephant Journal.

Somehow they always seem to find something that speaks to me there.

The article is about being a tender-hearted individual. Understanding the Sensitive Heart.

As they say in the article “All the answers lie within my heart.”

And anyone who knows me well, knows that I’m a big fan of trusting your gut and following your heart.

The article is worth a read if you think you have a sensitive heart.

I can play the extrovert but prefer my introverted heart. The former leaves me exhausted.

The fourth was a man who likes to be called Crazy Bob From Juniata.

I don’t recall his real name. And even if I do, I won’t mention it here.

All I know is that he was My Hero today.

I got …  yet another … flat tire today as I journeyed out to do what needed to be done.

Instead of being upset at the second unexpected flat tire in as many months, I was grateful that it had not occurred last night as I came home from my first Saturday radio shift.

Instead of being upset that it would tax the last of my dwindling reserves of money,  I was grateful that it happened here not too far from my house, where I might call a friend for help.

And instead of being upset that I was stranded and had to change the tire myself, I was grateful that it happened where a man who called himself Crazy Bob saw me standing with open trunk, flat tire and phone in hand … and pulled in to offer help.

I asked him how long he had been in the Hero business. He joked about doing kind things like this as some kind of Karmic pay back for past misdeeds of his youth.

I don’t know if this was the case. We laughed. But there was a serious look that crossed his face as he said it.

He went about the work of taking the tire off and replacing it with the donut tire … once again taken from the trunk where it had resided, unused, for all these years … until recently.

And we chatted comfortably. About things in life. About kindnesses done and good deeds unrecognized.

But mostly I thought of the Cardinal. Things are going to be all right.
And the article. Kindnesses done by a person with a Sensitive Heart.
And the meme. The meme.

I don’t know if he will tell anyone of his kind deed, or if he will even give it a passing thought after today.

But just for today, he was my hero.

I am thankful that our paths crossed.

2 thoughts on “Understanding the Sensitive Heart … And Crazy Bob”