And in truth this applies to ANY dating, in my humble opinion. I even made memes.

After yesterdays post and the subsequent comments and feedback, I felt you deserved a follow-up.

You may recall that yesterday after reading the most bizarre profile to date, I sent a terse note to the author of the profile, thinking that it had been written by a group of college frat boys in a drunken stupor. Pretty much had assumed that one was a Psych Major, one was a Snowboarder and one was Gay.

Imagine my surprise when, after posting the offering for the day, I went to my email and found a response from the author of the profile.

It is completely a lark without the beer. A solo enterprise. I couldn’t help myself. Wish I could talk more but I have to train some [college football players] for off season this evening.

I did go out and post a comment to this effect along with the comment “I find myself oddly wishing he really WAS a fifty-something man and available. Go figure.”

One of the folks who read the post, Sammy D., commented “Uh oh, now I don’t know whether to worry about you or encourage you.” It did make me laugh.

I did respond to his reply, and as of this moment there has been no additional response from Mr. Dangerous Muscles.

So now we get to today. And, inspired by the sense of humor of the profile writer and the wit of a few close friends, I decided to pass along the one thing that makes the most difference … at least to me … when looking around for possible playmates or partners.

This has been the case my entire life. Truth be told I have not always followed this advice as much as I wish I had.  But then, nobody is perfect.

This actually is a quote by one of the witty folks I just mentioned above. I don’t remember if he said this in person, or in writing, or in a chat, or what … but the unerring wisdom of it rings true for yours truly here.

He is a private kind of guy so I won’t mention who he is. Although I doubt he ever reads these … well … no matter.

I made memes in the male and female version. Same quote. Just in case you want to borrow them. 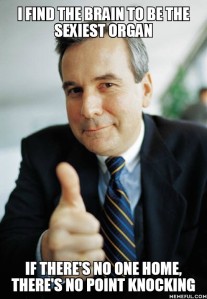 4 thoughts on “Online Boomer Dating … The Most Important Rule”