And how odd that the topic I wanted to write on today should also fall on the birthday of the man … John Steinbeck.

Who wrote Travels With Charlie … about his journey cross-country like I’d like to do … going pretty much where I would want to go … at pretty much the same age that I am now … and with a dog named Charlie.

First, I saw the headline.

I had been reading about this for days in my NaNoWriMo pages on Facebook and other places. I figured it was not for real.

After all, how would there be something this exceedingly cool that was also going to be for free? 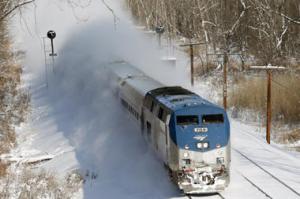 According to the article in Christian Science Monitor, I guess it started when writer Alexander Chee mentioned in an interview that one of the best places to write, for him, was on a train.

In the interview with Pen America, Chee said, “I wish Amtrak had residencies for writers.”

What a scathingly brilliant idea. After all, the whole train is going to go to the destination, whether or not the seats are all filled, right?

There seems to still be discussion on whether it would be totally free and what constitutes a writer. I’m pretty sure that being a curly-haired Baby Boomer Blogger should qualify, don’t you?

Then not only could I write here about Online Boomer Dating, I could also write about the Journeys of a Late Bloomer Boomer. And maybe also finally finish a few other projects I have been working on.

I do write better when it is quiet, or there is a constant dull sound in the background.

My mind strayed back to a time when I was a child of maybe six. No more than eight. And my beloved Grandpap who worked for the Pennsylvania Railroad (PRR) said “I will take you on a train ride someday.”

It seems that because he worked there, he was allowed to ride the trains for free … and maybe take his oldest grandchild for a train ride.

My heart leaped, my hopes soared and my dreams of riding some day on a train began.  Sadly, my Grandpap died when I was eight and the promised trip never happened.

In truth, I have never ridden on a train at all, unless you count the tourist train around the base of Stone Mountain back in 1975. But that’s a story for another day.

So something like this would be the final realization of an old cherished dream … and the chance to accomplish another newer one.

Then, I saw the birthday.

This morning as I woke and decided that I would write about this whole Writer’s Residency on a Train thing, I opened my browser only to see that today is the 112th birthday of John Steinbeck.

The Google Doodle highlighted a few of his works with a quote or two from each.

The one that caught my attention, for obvious reasons, was a conversation from Steinbeck in his life I gather. At least the first two lines. And the last was a line from the book, I suppose.

You don’t even know where I am going.
I don’t care. I’d like to go anywhere.

We find after years of struggle that we do not take a trip. A trip takes us.

Travels with Charley: In Search of America
John Steinbeck