You remember my Amish friends, right?

As in the people who put the metal roof on my house?

As in the people who built my Amish Shed?

As in the people who almost started a forest fire in my yard?

As in the people who pulled my car out of the mud with a horse?

As in the people who tape flashlights to their hats to work in the dark?

Yeah. Well. They also have a nice little Amish Store. More like a large shed actually. And I took a leisurely drive out there today with my partner in crime, Texas Linda.

And I’m sure you remember her.

The first thing you see as you turn off the main road (assuming it isn’t horses or people walking) is this shed.

It is a telephone shed.

What’s that you say? Amish don’t do telephones? Well it seems they do if the phone is registered in the name of a neighbor and housed VERY far away from their houses and can be used by everyone in the community.

Sometimes there is even someone in the shed to answer the phone.

The next thing you will see are the various areas filled with plants, flowers, vegetables, and all manner of growing things.

It seems that protection from the elements is allowed as well.

But truly I’ve never seen sunflowers as large as they grow them here.

Further up we passed some of the houses … including the house of the ever popular Jacob. He is the most outgoing of them all. A young man. Were he in the English world he would be a rich entrepreneur. As it is he is the social interface for the group. And he just got married as he was putting on my roof back in 2012.

You could tell, because there was a peach fuzz beard starting on his boyish face.

And today … today there was a baby swing hanging on his porch. 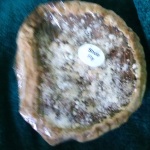 Finally reaching the store, we checked out the 10 pound cabbages and fifty cent cucumbers and $2 a dozen ears of sweet corn … and made our purchases.

But then there was Jacob. With his now somewhat respectable whiskers.

“Hello! How do you like the metal roof we put on your house?” He remembered.

“Great. I tell everyone what a great job you all did on it. Am I mistaken or did we see a baby swing on your porch?”

He blushed and smiled and said “Yes. We had a baby boy!”

So just as any nice type person would do, we oohed and aahed and congratulated him on his fine accomplishment.

Then. We had to ask.

“And what did you name him?”

Now what do you say to a name like Elmer?

“Well there’s a name that’ll keep him on the farm.”? (Yes someone said that later. Not me. *cough*)

or
“That’s a name all right.”? (my old Pastor years ago when he didn’t want to hurt your feeling would just say “You’ve got a thought there”)

or
“Oh that will make him popular at school on the playground.”? (and shades of childhood teasing flash through your mind.)

So instead we said something more along the lines of “Oh, you must be so proud.” and left it at that.

But as we were leaving a thought occurred to me.

Aren’t they all supposed to be named after Biblical characters? Like Jacob and Enos and all the other names I’ve heard there?

I’m sorry. There is only one Elmer that I know of that they are fans of. And he isn’t in the Bible.

Hint: He is real popular. He is known in carpentry circles. He sticks with you.