… or maybe an Ark, if things go as predicted.

Looking at all the maps of Frankenstorm Sandy, and at where I live here in Pennsylvania, all I see is Bad News Rising. No wait, that’s a Bad Moon Rising. A full moon for that matter according to reports.

Or is it a Bathroom On The Right? We’ll probably need a few of those around here before too long, too.

I woke this morning to the sound of rain dripping on my roof … no … wait … on my roof yes, but … also … in my front room. You know, the front room that just had a new roof put on a few days ago?

But I am oddly happy. Just a matter of getting the buckets I had recently put away. And the leaks aren’t nearly as bad as they were. Gotta have perspective here.

I have canned soup, a hand crank can opener, two canisters of propane for the Rhino Grill, cold things to eat, leftovers that work hot or cold, milk, bread and coffee.

There is a well in the basement, eleven 5-gallon containers of water … courtesy of the hoarder I lived with … and a little propane in the large tank attached to a fireplace. And it is not all that cold.

The gas tank is … oh foo … need gas. But since I do not plan to go anywhere anytime soon, this is not a big concern.

With all this in mind I decided to take advantage of the electricity while I still have it and make a huge pot of Chili and a big pot of rice … and invite folks over for dinner. Because Chili is the go-to meal if you want to cook something with little to no effort, do something else with others instead of cook, and eat it for days afterwards.

So what else does a sane woman do who is resigned to what is about to come?

I went to the store. After all, what is Chili without a fresh loaf of Italian Bread or something?

Let me revise that … I and half of the people in town went to the store.

The other half was probably at Wal-Mart.

But I was still in a great mood for some unknown reason.

I ran into my friend Yoga Sharon … who teaches Yoga … not to be confused with Jewish Sharon who is … well, Jewish. After a long chat in the organic foods section, I proceeded to get what I came for plus a few other things.

Seven cans of peeled tomatoes … for gas points … two cans of soup … on sale … five cans of tuna … in case its worse than I think … a loaf of bread … to go with the Chili … and one onion … since I used the last one up. 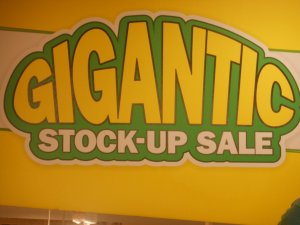 With purchases ready to go, I made my way to the front of the store where there were … tons and tons of people already waiting in line.

But that made sense because after all, they were having a GIGANTIC Stock-Up Sale. The sign said so.

Choosing one line that looked promising, I took my seven cans of tomatoes, two cans of soup, five cans of tuna, a loaf of bread and one onion, and I waited for some time until I was told by the cashier that she had to leave and this aisle was closing.

Because what you really need with a Hurricane bearing down on you and mega people at the mega sale in mega lines is one less cashier line open.

But I was still in a good mood, so I made my way to a line at the other end of the store and waited patiently with my seven cans of tomatoes, two cans of soup, five cans of tuna, a loaf of bread and one onion … behind a woman with a cart overflowing with supplies. And I began to talk to the woman behind me.

Before too long, the woman in front of me abruptly left the line to go elsewhere.

So I asked the young man in front of me if she was coming back.

“Oh yes”, he replied. “She just had to go somewhere else to get special approval for the Lion Cash for this guy in front of me.

Lion Cash. The debit card issued from the local University campus … that all the students use at all the stores in the area all the time.

Yes, I can see why that would require some special time-consuming approval today.

When the cashier finally did return she informed those of us in line that she was leaving and the lane would be closed … and we would have to go elsewhere.

On hearing the groans from the three people behind me in line, I turned and glared at her. I hate to glare, but … in my best Teacher / Professional / Announcer / Tiger voice I said “Oh no. We have all been waiting here all this time for you to get back here to check us out.”

Then a meek “Well, OK, I guess I could take care of all of you. But then I am closing.”

My ultra strong happy mood started to return, as I saw her check out my seven cans of tomatoes, two cans of soup, five cans of tuna, a loaf of bread and one onion. I wished the woman behind me luck for the impending storm … she commented how much she enjoyed chatting with me.

Really do like people. Bucket of worms, you know.

Making my way out to the car quickly I congratulated myself on getting myself and the groceries in the car … the seven cans of tomatoes, two cans of soup, five cans of tuna, a loaf of bread and one onion … without much rain on either.

As I was closing the door I saw that the woman across from me looking forlornly into her car … with the hood up … at the engine … and talking to a nice man who was offering to help.

“But what can we do without jumper cables?” she said.

Well, what could I do? I got back out of the car. In the rain. “Do you need jumper cables? I think I have some in my trunk.”

The relief was visible.

The jumper cables worked. I held the umbrella for them both. And my blown straight hair is now naturally curly again from standing in the rain.

What the heck. I am drip-dry.

And now I am home smelling the Chili cook, listening to the rain on my roof … and in my front room.

I am probably the only woman in town rooting for heavy winds and hurricane rain and snow. There are lots and lots of tall trees around the house … and I need a new roof.

And if I am not mistaken, I heard a large branch or two hit the roof last night.