I am pretty sure I know where this all began … Kind of like the quote “It was a dark and rainy night”.

Except in this case “It was a bright and sunny afternoon”.

For those who have not figured it out, from time to time I will do a punked / surprise ending entry out here. It makes me laugh like crazy, and certainly makes me … and a small group of friends who are clued in … happy as all get out.

One example would be the one about My Friend Ann’s Not-Quite-Yard-Sale. And another would be yesterdays one about Mt. Rushmore. (hint: read all the blue letters.)

Makes me laugh when people underestimate me, or think me less than intelligent. Doesn’t happen often.

I was in the process of doing one of my few punked entries out here, and in addition to what I was doing, I saw a cool Personalized License Plate. So I took a picture.

This is the picture.

It made me laugh.

It made me happy.

As a matter of fact, I did a bit of a punked / surprise ending entry on the process of doing it a while back. The one about being a stalker. And for that matter there was another blog entry about having shot … someone.

The whole thing has gotten to be quite the … Hobby? Obsession? Addiction? Contagious Something-Or-Another?

It has gotten to the point where I can spot a Personalized Plate a good ways off. And there are several here in this state. Unlike other states, where the initial cost is quite high, or where there is a yearly recurring cost for a Vanity Plate, here it is quite easy.

Twenty Dollars … One Time Only.

And as I mentioned in another blog entry, when you get a public license plate there is no reasonable assurance of privacy … so that means I can take pictures.

And I capture them now … on film. Just for fun. And there are plenty of them around here. So I thought I might do a few days of some of my favorites … along with running commentary, of course.

And as far as the Contagious comment above … well, it seems that at least two of my friends have started capturing photos on my behalf. Even when I am not with them.  Both have made some comment to the effect that it is habit-forming.

And truth be told both of them ended up driving around the block / out of their way to try to get the pictures for me.

Its contagious, I tell you.

Well, mostly they don’t even know I am doing it. And for those few times that they have caught me, I just start talking to them.

“Hi there! I go around taking pictures of the very best Personalized License Plates. Kind of like a hobby. And YOUR plate is one of the best I have ever seen.”

My thinking … if they are the sort that wants to let the world know, well, whatever their plate says … then they are most likely fine with people being impressed by it.

Some of them are GR8.

And some are incredibly creative. Like the two below.

But to be honest, most of them are just So-So. 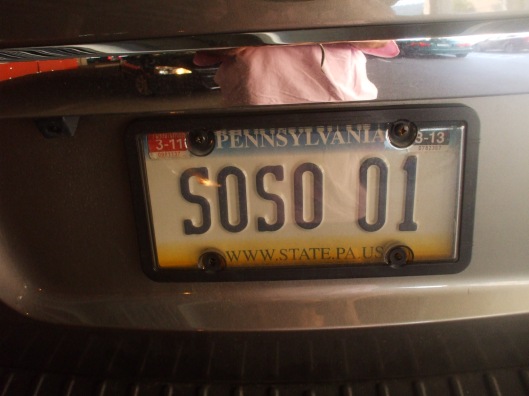 5 thoughts on “Hobby? Or Addicition?”