It’s about the one sitting on my desk.

It all started with a quick trip with my friend Linda. Has anyone else noticed how many of my hijinks start with this line?

So we headed for the pet store. To get doggie treats. For her dogs.

Looking around the store I passed the display of Betta Fish. Now, I had gotten Betta Fish once before … for my daughters … when they were young, and I was newly divorced from their father.

This was before the Puppy and the Pony.

There had been three Betta Fish back then … all in their own Betta Fish bowls … happily swimming around.

And I thought it would be a good idea to change the water. So I set out water … to sit for a few days … I’m no novice at this you know.

And lord knows the water needs to be temperate. So when the time came to change water, I decided to lightly heat up the water.

Several minutes later, there were three par-boiled Betta Fish … all floating in their own Betta Fish bowls … not swimming anywhere.

I mentioned that I am no novice at at this fish thing.  Oh no. Not me. My first fish experience goes all the way back to the Junior High era of young Hollys’ life.

Mom had decided to get a few Black Mollies, a few Red Swordtails and a few Tiger Barbs. And two Angel Fish.

First, we learned that Swordtails can change sex as will … enter several baby Red Swordtails to the mix.

Shortly thereafter there were two tiny little baby spiral snails climbing the side of the fish tank.

Then she saw two more.

“Wow!” she exclaimed while rushing for a magnifying glass. “Look at this. Two more. Two more of God’s little creations. How wonderful.”

The next day there were another half-dozen snails climbing the sides of the tank.

“Oh my goodness” she said. “Look at all the snails. This will certainly keep the tank clean.”

Several days and a few hundred snails later, a more than slightly disgruntled Mom was scraping the sides of the tank from all the snails … and flushing them into their new home … anywhere but our home.

So I should have known better when, as a newly divorced woman, I set up a fish tank … with a few Black Mollies and several Red Swordtails.

Do you have any idea how much your electric bill goes up with a fish tank motor running 24/7?

And how long it takes for the last Swordtail to die of old age … long after the thrill is gone?

And you have all read how I took the two cats and seven kittens and gave them a new life somewhere else. Leaving my house blissfully pet free.

Which brings us back to today … at the pet store … looking for doggie treats.

As I walked down the aisle, I saw a Woman grilling my friend Linda. “Where are the Betta Fish? I want a Betta Fish.”

“They are back there” said Holly.

“Oh my gosh. I am stupid. Just call me stupid. I can’t believe I was so stupid as to think she worked here.” said the Woman.

After assuring her that her brilliance was indeed intact, we all went our own ways. But for some reason I kept thinking of the Betta Fish.

A teacher I knew had one on her desk … and it lived.

Another friend had one … and it lived.

Not everyone had bad Betta Fish stories like me.

After working our way around the store we came back to the Betta Fish display. Where the woman was holding a beautiful turquoise and teal Betta Fish.

“I am going to get one of these, but I don’t know which one to pick.” said the Woman.

“That one is pretty. It would match my bedroom perfectly.” said stupid Holly.

“Oh here … please take this one … I will take this other one I was looking at.” said the Woman.

“Oh no,” said a suddenly panic-stricken Holly. “I wouldn’t dream of it. No, you take it.” 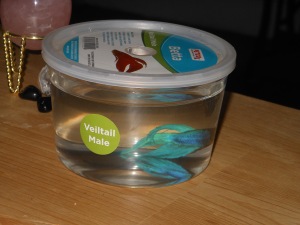 “No, no. I insist … I wouldn’t want you and your friend to think I was crazy.” said the crazy Woman.

So … what? Betta Fish are now the Peace Offering for craziness?

“Obviously she hasn’t been hanging around with us, if she’s worried about us thinking she is crazy.” said Linda.

And before you could bat an eye … or wave a gill … I was walking around the store actually thinking I might like this Betta Fish.

It would match my bedroom after all.

But it isn’t as simple as just buying a Betta Fish. After all I have three Betta Fish Ghosts in my past. 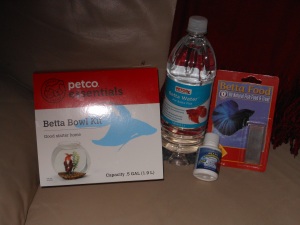 So I got a Betta Fish Bowl.

Well, it is what they have been feeding him at the store.

And Betta Conditioner … to Protect Scales and Fins … and Reduce Stress. Nothing worse than a Stressful Betta Fish, I guess.

Which brings me to here, now, typing this blog … and doing a Google Search on “Do Betta Fish get lonely?”

“What are you going to name it?” asked Linda.

You have to name these fish too? What do you name a Veil Tail Male? 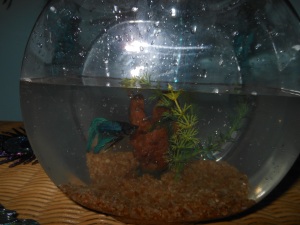 12 thoughts on “A True Fish Story”