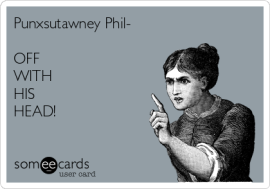 The chants are getting louder and louder here.  I’ve not seen any pitchforks, but then it is early in the evening and not even dark yet.

Lots of items are appearing on Facebook, though. And let me tell you, the groundhog is one persona non grata around here.

Or would that be Marmota non grata? 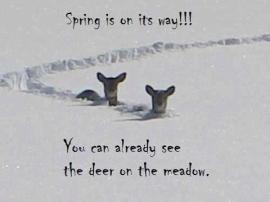 I’m pretty sure I heard some rifle fire up the street … although that is not unusual around here when the snow falls and Deer Season approaches.

Except that it is not Deer Season.

It is Spring. I know it is. I checked the calendar.

I tried to check the weather forecast.

If I could I would go out to weather.com to check what the weather is going to be doing here in the next few hours. Except that when you type in weather.com you get a screen that says “Service Unavailable”.

Maybe the folks with pitchforks are there.

See all that blue in the picture here? That means snow headed this way. Tonight. Here.

hat’s where the groundhog was last seen alive.

He’s not real popular up there right now either. After all, that is how those folks make a fair amount of their annual income.

Even down in Pittsburgh where the movie Groundhogs Day started, they are starting to give up hope.

Now, in my life I have to admit that lawyers have not been the source of all that much good news … and note to self: never date a lawyer again.

Punxsy Phil has been sued. By a lawyer in Ohio … suing him for an unclassified felony which somehow involves the death penalty.

On or about the first day of spring, the Butler County, OH prosecutor indicted Phil (Fig. 2) for his 2013 early spring forecast, declaring that, “…Punxsutawney Phil did purposely, and with prior calculation and design, cause the people to believe that Spring would come early.”

Maybe he can get a defense attorney from the other side of the state … in Philadelphia. Although I thought I heard there was a lawyer down there suing him as well.

They always were a litigious bunch down there anyway … she said, showing off her propensity for verbosity.

Ill feelings have been running high for said groundhog since earlier this week. The first day of Spring.

At least that is what we were told.

You wouldn’t know it from the way things were looking around here then.

Personally I am looking for a more accurate way of predicting the weather. Something more scientific than a stupid groundhog.

I’m thinking John here has a pretty good idea. Can’t go wrong with a weather stone, can you?

But then, this is said by a native of the Commonwealth that sets great store by what a rodent says about the weather. So you might want to take my meteorological judgement with just a grain or two of salt.

You’ll find plenty of that salt. Out on my front steps. Ready for the snowstorm.